What is a city? Definitions of the urban 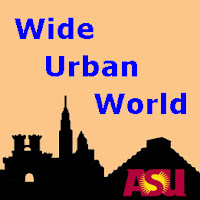 What is a city? How do we distinguish urban from non-urban settlements in ways that make sense? Does it matter how we define cities, or is definition just a sterile typological exercise? Definition is crucial for comparison. If we are going to compare cities, or parts of cities, then it helps to have a clear and explicit notion of what we are talking about. In my field, archaeology, there are two main kinds of definitions of the city, based on two of the important characteristics of cities. The demographic definition is based on the idea that cities are big places with lots of people, while the functional definition flows from the notion that cities have an impact on their surroundings. Neither definition is “correct” or “best.” Rather, they are more or less useful for various kinds of purposes.

This definition was first codified by sociologist Louis Wirth in his influential 1938 paper, “Urbanism as a way of life” (Wirth 1938).  Cities, according to Wirth, are defined by four characteristics:

This sounds pretty good to most modern ears. It certainly fits contemporary cities, although there is always room for quibbling with quantitative definitions (How many people? How much heterogeneity?). To use the demographic definition, one looks at a settlement, makes some measurements, and decides whether or not it is a city.

The Functional Definition of Urban

Although there may be precursors, most modern functional definitions of cities derive from mid-20th century economic geography, where central place theory focused on the regional distribution of retail market centers. Market centers provisioned a hinterland, and the larger the hinterland (and the more goods and services provided), the more important the center. In these models retail marketing is an urban function—an activity or institution located within a settlement that affects people and places beyond the settlement. Later developments in anthropology and geography expanded the notion of urban function beyond economics to include politics and religion (Fox 1977). From this perspective, the Classic Maya jungle cities can be considered urban because their kings ruled city-states larger than the individual settlement, and their temples were the focus of worship for peasants as well as urban dwellers. From the demographic perspective, on the other hand, the Maya centers were not big enough to be called cities. To use the functional definition, one cannot simply look at a settlement and decide whether it is urban; one has to look at the entire regional context, including the hinterland and other nearby settlements. If the settlement in question was the setting for people and institutions that impacted a larger realm, it can be considered an urban settlement.

I generally prefer the functional definition, and I’ve argued in its favor on and off over the years (Smith 1989, 2008). I don’t feel that it is inherently better than the demographic definition, only that it contributes more to advancing research and understanding in some of the topics I work on. A good example is the Classic Maya, the urban status of whose capitals was the subject of a lengthy debate. In a series of publications starting in the 1960s, William Sanders applied Louis Wirth’s demographic definition of urbanism to ancient Mesoamerica. In his perspective, Teotihuacan (over 100,000 population; density ca. 5,000/km sq) was a clearly a city, but Tikal and the other Maya centers were not sufficiently big or dense or socially complex to be called cities. If the goal is to analyze how large dense cities differ from smaller more dispersed settlements, then the demographic definition makes sense. The urban experience must have been radically different for the residents of Teotihuacan compared to the residents of Tikal or Copan.

On the other hand, if one is interested in how the Maya centers affected their hinterlands, or the nature of their political, religious or economic influence, or how the inhabitants of the Maya landscape were linked together by polities or market systems or religious communities, then the demographic definition is of little help. The functional definition of urbanism acknowledges Tikal and Copan as urban centers, and this helps us understand how Maya society worked on a regional scale.

One of the things I like about the functional definition of urbanism is that it allows us to talk about different kinds of cities: political capitals, religious centers, economic centers, and other types. Sometimes the type of city differs among urban traditions. Swahili cities were trade centers, whereas most Maya cities were political-religious centers. And sometimes a single society has different functional types of cities. Just as the United States today has such diverse cities as Washington, DC, New York City, and Miami, so too did Aztec central Mexico have an imperial capital (Tenochtitlan), ritual centers (Malinalco), and city-state capitals (many examples).

Definitions help orient us in a field, they aid comparison, and they help us understand urban societies and their transformations. There is more to say about the topic, which I will return to in a future post.

Email ThisBlogThis!Share to TwitterShare to FacebookShare to Pinterest
Labels: Definitions