Living the good life in Teotihuacan 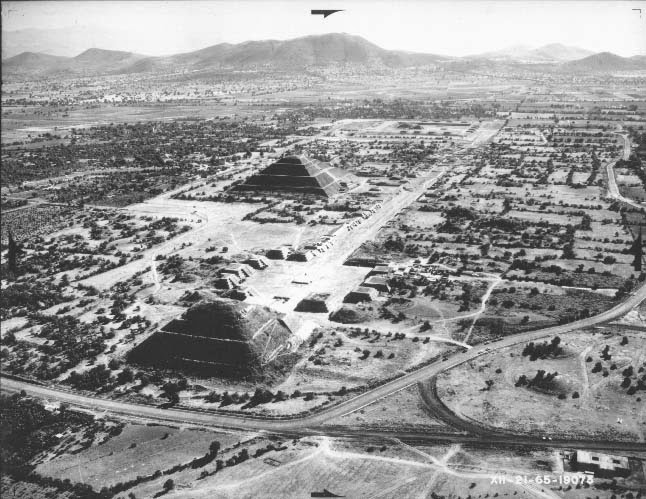 I have written two articles that contain new information about life in ancient Teotihuacan. These are scheduled to be published in November, but in the meantime I want to talk about some of the new findings and their implications. Teotihuacan had a unique form of urban life and society. I don't mean this in the sense that one can claim that every city is unique. What I mean is that Teotihuacan had several features that are VERY unusual for premodern cities. Here I will mention several of these features:

(1) Most residents lived in a form of housing that is unique among early cities of the world: the apartment compound.

There are over 2,000 apartment compounds at Teotihuacan. Although each one has a unique layout, most of them share features of their construction and layout. There is usually a single doorway in the stone outer wall. Entrances lead to a central open courtyard, which typically has some kind of temple or shrine or altar. Passages lead out from this to the individual apartments, which usually consist of a small open courtyard surrounded by rooms with porches.The courtyards are built at a lower level than the other rooms, and they are drained to the outside by pipes and channels under the floors. Floors and walls are covered with white lime plaster (technically, a form of concrete). The walls were usually painted with bright colors, with scenes of people, animals, and gods (see the image of Zacuala).

My first article (Smith 2014) reviews the forms of urban housing used around the world before the Industrial Revolution. The various forms of housing are shown in the following typology:

Among all of the premodern cities of the world, the apartment building is the least common form of housing. Ancient Rome had apartment buildings (called insulae), as did some of the cities in the Ottoman Empire such as Cairo. But in those cases, apartments were small, cramped arrangements built to hold an overabundance of new urban immigrants. The Ottoman apartments often started out as large, spacious single-family houses that were subvided into many small apartments.

(2) Apartment compounds were luxurious and well-built.

The Teotihuacan apartment buildings are unusual (compared to Roman and Ottoman apartments) in
two ways. First, they are single-story structures. And second, each household had quite a bit of space, including a courtyard and several rooms with porches facing the courtyard. So these do not look like hasty buildings or conversions to accommodate an influx of new urbanites. They are spacious and open dwellings. When Laurette Sejourne excavated one of the first apartment compounds at Teotihuacan, she thought at first she had excavated a palace, and her name "Zacuala palace" is still used sometimes. In comparison with other ancient Mesoamerican patterns of housing, these structures do look like elite houses. Commoners, at other Mesoamerican cities, tended to live in small single-family houses.

In Aztec times, for example, there were a number of forms of commoner house (see the graphic, from the Florentine Codex by Sahagun), and I have excavated many of these structures. If I uncovered a Teotaihuacan-style apartment compound in an Aztec site I was excavating (and if it was indeed an Aztec structure, not an older pre-Aztec structure), I would call it an elite residence. The only Aztec houses this large, with this many rooms, and rooms this large, are elite residences. So while the overall form of a Teotihuacan apartment compound is not unique, it is very strange for a commoner house. Or was it an elite house? But you can't have most of the population as the elite? Or perhaps commoner and elite are not the best labels to use for the residents of Teotihuacan. This, again, is just plain bizarre for a Mesoamerican society. At just about all Mesoamerican urban sites, there are elite and commoner houses (typically at a ratio of ca. 50 commoner houses for every elite house), and it is rarely difficult to distinguish them.

(3) The apartment compounds appear to have been built in a single episode of urban renewal around A.D. 200.

Although we still have relatively few securely dated, excavated apartment compounds at Teotihuacan, it looks like most of them were constructed in a burst of activity around A.D. 200. In some of the excavated examples, there are irrigation canals below the floors, showing that the city expanded to cover former irrigated agricultural fields. We think that the houses before this episode were less regular, perhaps not conforming to the plans of apartment compounds. But in truth we know next to nothing about housing before this time. But why did the people or rulers of the city feel the need to obliterate older housing and agricultural fields to construct two thousand new apartment compounds?

(4) The level of social inequality was very low at Teotihuacan.


The second article that is now in press (Smith et al. 2014) is mainly about social inequality at Aztec sites. We illustrate the use of the Gini index to measure ancient social inequality, based on the sizes of houses. But while we were at it, we decided to try the method out on Teotihuacan. This required figuring out how the apartment compounds were divided into individual household dwellings. Student Rebecca Harkness took on this task, the the graphic shows her results for the Tetitla compound. We had to make some assumptions (e.g., that the excavated apartment compounds are representative of the unexcavated ones), and our result was very surprising.

The Gini index for Teotihuacan is 0.12, a very very low level for an urban settlement. This means that the level of inequality was quite low. All of the Aztec cities have higher values; the only site with a comparable value is a peasant village (Capilco). There are several reasons for such a low Gini index for Teotihuacan: (1) most houses were of a similar size; (2) there are a few smaller structures (probably adobe huts), and a few larger structures, but no huge royal palace. Yes, I know, some colleagues don't agree, and they have tried to identify a royal palace at Teotihuacan. But they can't agree with one another, and if you can't agree about the royal palace, then there probably wasn't one. No one has to scrounge around to find the royal palace at Maya or Aztec cities; they are quite obvious, huge structures that are many times larger than the typical house.

So, what does all this imply about life in ancient Teotihuacan? I think it is still too early to come to firm conclusions here. We need more excavations (several projects are ongoing at Teotihuacan right now, including work by by ASU colleague Saburo Sugiyama, and a project direct directed by David Carballo of Boston University). We need more studies of the already-excavated examples; ASU student Melissa Marklin is working on this now. I am not the first one to suggest that life and society at Teotihuacan were very different from other Mesoamerican societies, and from other cities around the world. Rene Millon and George Cowgill have talked about this, and Esther Pasztory has called Teotihuacan "an experiment in living."

Nevertheless, it seems clear that most people at Teotihuacan had large, spacious dwelling to live in. They had access to a wide range of household goods, for cooking, ritual, crafts, and other activities. There doesn't seem to have been a strong autocratic king ruling things, yet someone has enough clout to carry out a major urban renewal project. We can't find much evidence for a definite elite class. And people lived in a type of housing that was unique in the premodern world. What was going on at Teotihuacan? These facts remain disconnected and tantalizing, and we desperately need more research to figure things out. But I think we can conclude that people there were living the good life as part of the wide urban world.