How do neighborhoods form?

Neighborhood organization is one of the few universals of urban structure. All cities, past and present, all over the world, are organized into neighborhoods. Sometimes neighborhoods are planned from the start by officials or commercial builders. Think of all the ready-made suburban neighborhoods built by developers today, with their phony bucolic- or English-sounding names. Or consider company towns, whether ancient Egyptian workers settlements or capitalist factory cities like Pullman, Illinois. The planners build in neighborhoods from the get-go. If they aren't planned out in advance, however, neighborhoods spring up on their own. People interact with those living nearby, new residents move into areas where they know people, or where people are like them culturally, and before long there are neighborhoods that are clear to residents and visitors alike.

One of the best ways to look at certain urban processes, to my mind, is to examine "semi-urban" places. These are places where large numbers of people gather together, often on a temporary basis. They aren't really cities--they aren't permanent enough. After a while, people leave and go home. But when people gather in  one place, a certain "energized crowding" takes place (see my post on Cities as  Social Reactors), and by looking at what happens, we gain a better understanding of urban processes and activities.

So, here I want to take a quick look at three very different kinds of semi-urban settlements (a company town, a protest camp, and the Burning Man festival) to see how neighborhoods develop. This post is based on a recent article (Smith et al. 2015) that looks at neighborhoods in a wider range of semi-urban settlements. I won't cite a bunch of sources here; see that article for citations and a more scholarly treatment.

The company town is a settlement planned and established by a central organization to house its workers so that they can work more efficiently. They tend to exhibit careful planning and regularity of housing; they show some evidence of the central authority; and they are physically set off from their neighboring settlements. We tend to think of company towns as modern features, used by capitalist enterprises. But the basic concept goes back to ancient Egypt at least. Pharaohs set up walled settlements that archaeologists call "workers villages" to house construction workers, or temple personnel. This was not by any means a capitalist economy, yet the form, function, and goals of workers villages matched closely those of a 19th century town like Pullman, Illinois. These settlements are one of the main types of what Kevin Lynch called "the city as a practical machine."

My example here is Abadan, an oil refining town set up in the early 20th century in Iran by the Anglo-Persion Oil Company (later known as British Petroleum). The company knew they would need to bring in workers from several national/cultural groups, and they were worried about possible trouble that could come if members of these groups could easily mingle with one another. So thay arranged the housing in a big band around the outside of the refinery, and
they kept individual neighborhood units separate from one another. The British executives and engineers were in one area, and various local and Near Eastern groups were distributed in other areas.

The plan to settle groups in physically separate neighborhoods was quite deliberate, as research into company archives has shown (see Smith et al 2015 for citations). So, Abadan ended up with a system of neighborhoods, distinguished culturally and socially, as a result of deliberate planning from the
top. Such "designed neighborhoods" are also found in other company towns, and in other regimented planned settlements such as internment camps.

Information from the Occupy Portland camp was gathered by Katrina Johnston-Zimmerman for her MA thesis. Katrina is an interesting urbanist; check out her "Think Urban" website or her Twitter feed. As an undergraduate at Arizona State University, Katrina worked for our interdisciplinary urban project, "Urban Organization through the Ages." She conducted ethnographic fieldwork during the "Occupy Portland" event of 2011. This was one of the many local protest camps that spring up following the initial Occupy Wall Street settlement.

What Katrina found was that the campers in Portland quickly formed spatial clusters of like-minded people who spent time together. They set up their tents near one another. These groups took on names. In short, these were neighborhoods. This is a clear example of the bottom-up route to neighborhood formation. People created neighborhoods on their own, following their needs and interests. No one came along and organized the campsite. In fact, the participants in the Occupy Portland event refused to submit to a top-down organization. Someone pointed out that the campsite looked messy. If they reorganized it to look neater, with tents in nice rows, then the authorities would be less likely to tear it down. (This is a basic principle in informal settlement invasions in Latin America; local governments are far less likely to destroy shantytown settlements when they have neat streets and lots than when they are a mess).  But, true to their anarchist orientation, the participants refused to submit to this top-down structure. The messy, grass-roots organized spatial organization of neighborhoods was too strong to be torn apart in an effort to please city officials.

The Burning Man Festival: From Anarchy to Planning

The annual Burning Man festival in the Nevada desert is a fascinating case study of a semi-urban settlement. What began as a bonfire on the beach in San Francisco in th 1980s has grown into a huge annual campsite with as many as 70,000 week-long residents. It has always been a festival of arts and free expression, run with a series of anarchist principles, including radical inclusion, decommodification, communal effort, radical self-reliance, and leave no trace. The entire settlement is taken down each year, all traces are removed or destroyed, and then it is planned, surveyed, and built again the following year. Urbanists have only just begun to study Burning Man, and there is much to learn there about cities, urbanization, and social patterns. 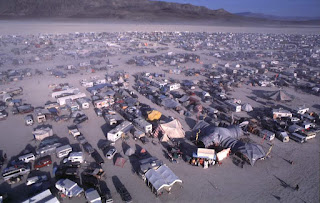 The Burning Man site is on federal land, and the festival receives a permit each year. As the festival grew during the 1990s, people naturally gravitated toward specific areas, forming neighborhoods. These were linked by friendship and social bonds, as well as by interests (e.g., all-night loud parties in one area; campers with small children in another). But by 1996, the event had grown too large to function on its anarchist principles. People were shooting guns in crowded places, driving cars too fast and destroying tents and injuring people. The government threatened to shut down the festival (by denying the permit) unless more order were achieved.

Almost overnight, the site -- called Black Rock City -- became a heavily planned settlement, with a circular layout and the burning man tower in the center. There is now a "Department of Urban Planning" in the Burning Man organization. Neighborhoods were either continued, or established anew, again, using social bonds and common interests as defining features. These anarchists were able to submit to some top-down planning in order to continue to celebrate their anti-authoritarian and free-expression values. 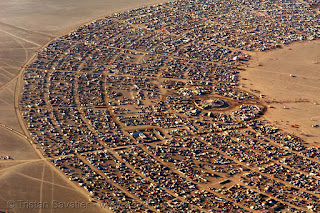 Whereever you look, there are neighborhoods!

These are just three examples of semi-urban settlements with clear neighborhood organization. Our study found neighborhoods at many other types, from Plains Indians tipi camps to refugee camps. The conclusion I draw from this study is that neighborhoods are indeed a  universal feature of urban life. Whether created and enforced by authorities (state or corporation), or generated by grass-roots action of individual acting in their own, neighborhoods are an integral and crucial part of urban organization, from the distant past to the present.