Thanks to extensive research projects carried out in recent years, we now know that the first urban and proto-urban of centers Temperate Europe developed between the end of the 7th century BC and the 5th century BC in an area stretching from Závist in Bohemia to Bourges in central France. Amongst these ‘centers of power’ that preceded the Late Iron Age oppida by several centuries, the most intensively investigated site is the Heuneburg in southern Germany (Fig. 1). In the mid-5th century BC, the Greek historian Herodotus of Halicarnassus wrote in his famous work Histories (II, 33): “The Istros [Danube] river arises among the Celts and the polis of Pyrene, cutting Europe across the middle.” It has been suggested that Pyrene, the polis mentioned here, is Heuneburg, and that this is the first time that a city in Central Europe is mentioned by name.


While this reference cannot be proved, archaeologist have shown that the Early Iron Age Heuneburg was a substantial settlement that flourished politically and economically. Its residents had extensive connections with areas as far away as Etruria and the Greek colonies (Fig. 2). The most striking feature was the discovery of a mudbrick wall based on Mediterranean prototypes and probably erected in about 600 BC.


For a long time it was thought that the settlement at Heuneburg was mainly confined to the 3 hectares of the central hilltop. However, new work in the last 20 years has radically changed this picture. More than just a small hillfort, in the first half of the 6th century BC we are looking at an enormous settlement of 100 hectares with an estimated population of around 5,000 inhabitants. The entire site was, in fact, divided into three areas: the citadel (hilltop plateau), the walled lower town, and the outer settlement (Fig. 3). Moreover, from the beginning the settlement at Heuneburg was surrounded by numerous burial mounds which served as last resting places for members of the social elite and their relatives (Fig. 4).


The fortifications around the lower town were impressive, and a monumental stone gate was recently excavated at the site (Fig. 5). The extent of the settlement, the presence of imposing monumental structures as well as indications of significant differences in social status and specialised production, justifies categorising Heuneburg as a ‘town’, at least for the period of the mudbrick wall (c. 600 - 540 BC). But it is important to realise that the extent and the significance of the Early Iron Age site continued to change throughout its less than 200-year occupation. Indeed, the various building phases, fires, and constant restructuring are testimony to an eventful existence with dynamic social changes.


Some references in English:

Posted by Michael E. Smith at 8:33 PM No comments:

Early urbanization in Europe north of the Alps

Greetings from Stuttgart, Germany. I have been attending a very interesting conference on Eurasian cultural developments between 800 BC and 400 BC. Today one of the conference organizers, Manuel Fernández-Götz, took me to see two early urban sites: Heuneburg and Heidengraben. They are in the state of Baden-Wurttemburg, within a couple of hours of Stuttgart by car. Heuneburg is a fascinating site and very important for understanding pre-Roman urban development in Europe north of the Alps. As we left the site was thinking I should post an entry on the site, but then I realized that Manuel could do a much better job than I could. He agreed, and his post will appear soon. So now I will just give a few impressions of the conference and the sites (and perhaps of the tasty local food), leaving the major description of Heuneburg to Manuel. Stay tuned.....

Here is some context. The old view of Iron Age Europe was that this was the setting for warlike barbarians who constantly fought one another until the Romans brought peace, civilization, and cities to the area. This view was based more on Classical authors than on archaeology. Julius Ceasar conquered many of these "barbarian" groups when he conquered Gaul in the 50s BC, and he described the larger settlements as "Oppida," meaning a large fortified settlement. Over the past century archaeologists excavated many Oppida sites, and many of these have urban functions that justify their classification as urban settlements (see my prior discussions of urban definitions:  Here  and Here ). Some of the archaeologists who contributed to this work were at the Stuttgart conference. including old hands like John Collis and Peter Wells and younger scholars like Manuel. The Oppida vary greatly, and this remains an enigmatic form of settlement.

The site of Heidengraben, which we visited today, is the largest oppida, but much of the settlement consisted of apparently empty land within a large walled enclosure. We could see some of the walls and formal gated entrances. Lost of people were out and about today, walking their dogs, cross-country skiing, and sledding on the slopes. The gate and everything else was covered with snow.


Much more spectacular than Heidengraben is Heuneburg, which dates to the Early Iron Age, or Hallstatt period, centuries earlier. Excavations at Heuneburg long ago revealed fortifications, elite burial mounds called tumuli, imported goods and houses. But more recent work directed by Dirk Krausse (a co-organizer of the conference) has added some key attributes of social complexity and urbanism, including a very rich child burial (which suggests that wealth and status were inherited, not just acquired within an individual's lifetime); the existence of a very large "suburban" area of houses in walled compounds at the base of the fortified hill. Manuel Fernández-Götz and Dirk Krausse have written an article, now in press in the journal Antiquity, that argues for the urban status of Heuneburg. If the site was indeed an urban center, it would make it the earliest urban site north of the Alps. I agree with their evidence and interpretations, but I will let Manuel describe the site and its urban aspects in more detail in his upcoming post.

The conference explored urbanization, social complexity, political organization, and processes of individualization throughout Eurasia during the Early Iron Age (800-400 BC). It was fascinating and I learned a lot and got excited about these sites. My role was to give a talk on the concept of urbanism and how it is studied by archaeologists. 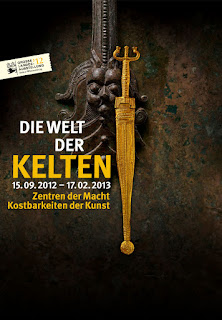 The conference participants were also given a guided tour of a fantastic museum exhibit, "The World of the Celts." This exhibit has many of the important early Iron Age finds that we saw in the slides of conferenece participants, including the gold jewelry pictured above.

One final observation at the end of an excellent trip to Stuttgart: The State of Baden-Wurttenburg really supports archaeology well. The citizens are very interested in their past, turning out in thousands to see the two museum exhibits on the Celts and visiting the sites in the region. The state cultural office has a staff of hundreds, carrying out excavations (with sophisticated and rigorous methods) mounting museum exhibits, and other activities.And one final, final observation: the food in this region is fantastic.


Here are a few sources on the Oppida, emphasizing English-language works:

Email ThisBlogThis!Share to TwitterShare to FacebookShare to Pinterest
Labels: Ancient cities, First cities
Newer Posts Older Posts Home
Subscribe to: Posts (Atom)
"Wide Urban World" is a blog about cities as viewed from a broad historical and comparative perspective. As Winston Churchill said, "The farther back we look, the farther ahead we can see."