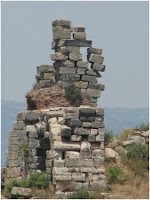 Many people will be puzzled by this title. The city and the state are separate concepts that refer to very different things. Why would they need to be "disentangled"? But in my own home discipline—anthropological archaeology—these two concepts have long been wrapped up together in a single package. A long-standing goal of anthropological archaeology has been to figure out the origins of early cities and states. But when cities and states are not distinguished, that goal has been impossible to reach. Now evidence is accumulating that archaeologists can't ignore, and it is time to give up the old view once and for all.

Figure 1 shows the standard model for state origins in anthropological archaeology. Various factors led to the establishment of the earliest states (archaeologists have argued a lot about the relative importance of those factors). Once states came into being, cites came along too, for the ride. Archaeologists didn't think that urbanization required a separate theory. About fifteen years ago I started focusing my comparative attention on cities and urbanization. I quickly realized that while these old views were inadequate, they were deeply engrained. I recall not long ago emailing an Egyptologist with a question about early cities in Egypt (I forget now just what I asked). This person's response was, "I can't help you, because I haven't worked on state origins for many years." Say, what? I hadn't asked anything about states, I had asked about cities.

I think one reason archaeologists were slow to separate states and cities, was because most cities in the ancient world were dominated by politics, and not by economics. Today, cities are all about economics: factories, production, trade, commerce, firms, and employment. Political processes play a decidedly secondary role for most urban issues. But in the deep past, on the other hand, most cities were all about politics. They were capitals where kings lived, or state outposts where bureaucrats operated. Economic activity took a back seat to political activity in generating urban growth and shaping the nature of cities (Jose Lobo and I develop this theme in a paper now under review, "Cities through the Ages: One Thing or Many?"). Since cities were essentially political institutions, it seemed natural to link urbanization to state formation.
Nevertheless, cities and states are quite different, whether we are talking about nation-states today or the early states and empires. Figure 2 shows one small piece of evidence supporting this idea. This table, from an article by Garry Chick (1997), shows the results of a factor analysis of a cross-cultural sample of human societies. The Standard Cross-Cultural Sample is a collection of human societies described by anthropologists that can be analyzed statistically (see Ember and Ember 2009). In this study, Garry Chick examined how a number of social variables were associated in the sample. He identified two factors, or principal components. Factor 1 has high loadings for variables related to administration and economics (red box). This shows that these traits are strongly correlated; they come as a package in some societies. Societies either tend to have writing, money, and social stratification, or else they tend to lack these things. These are state-related variables. A second set of variables scored high on Factor 2: these are urban-related features (residence patterns, density, urbanization, and agriculture). The interesting thing is that principal components defines factors that are independent of one another ("orthogonal" is the technical term). That is, knowing the score of a society on Factor 1 will not help you predict its score on Factor 2. In other words, urban features are basically independent of state features when a wide range of human societies is considered.

A recent book by Justin Jennings, called Killing Civilization: A Reassessment of Early Urbanism and its Consequences provides more evidence for the need to separate cities and states in the distant past. This is a fantastic book, and I will blog about it in more depth before long. For now, I want to emphasize one particular strand of Jennings's argument. He proposes two reasons why archaeologists and anthropologists should abandon the concept "civilization." First, the concept "helped justify colonial and racist projects of the 19th and early 20th centuries" (p. 266). If some societies are "civilizations" and others are not, this implies some peoples are civilized and others are not. But this is more of an evaluation, a value judgment that has often justified racism, and less of an analytical term. Therefore scholars should give up the concept of civilization. I agree.

Second, the idea of civilization—as in "the rise of civilization"—confuses state formation and urbanization by implying that they are both parts of a single package that came into being all at once. Much of Jennings's book is devoted to examples of early urban settlements that developed prior to state organization. If urbanization preceded state formation, then these two processes must be disentangled if we are to make any sense at all of early developments. I REALLY agree!

This last point gets into the broader and very important issue of how urbanization generates changes in society, and how the results of living together in dense settlements may have led to early state formation. This is a theme I have been working on recently; see some of my prior blog posts (such as Cities as social reactors, or Settlement scaling and social science theory). I have some papers in press and under review on this topic. But this kind of new approach only makes sense when archaeologists have actually disentangled processes of urbanization and state formation. From the point of view of comparative social-science research on cities, this is a no-brainer. But some archaeologists still need to wake up to urban reality, and Justin Jennings's book is a big step in the right direction.

Jennings, Justin
2016  Killing Civilization: A Reassessment of Early Urbanism and its Consequences. University of New Mexico Press, Albuquerque.
Posted by Michael E. Smith at 11:31 AM 2 comments:

Email ThisBlogThis!Share to TwitterShare to FacebookShare to Pinterest
Labels: Cities and states, Generative processes, State formation
Newer Posts Older Posts Home
Subscribe to: Posts (Atom)
"Wide Urban World" is a blog about cities as viewed from a broad historical and comparative perspective. As Winston Churchill said, "The farther back we look, the farther ahead we can see."