The Native Americans of the North American Plains were some of the better known nomads of recent centuries. Groups like the Crow, Cheyenne, and Sioux took advantage of the horses brought to the New World by Europeans to forge a successful way of life hunting bison on the plains. They moved their settlements of tipis throughout the year, following the requirements of bison hunting. Life alternated between small camps of  five or ten tipis and larger camps of up to 100 tipis. Some of the larger camps ("cluster camps" in the language of Banks and Snortland 1995) had an unorganized arrangement of tipis, and some ("circular camps") were ceremonial in orientation and the tipis were arranged in a huge circle. 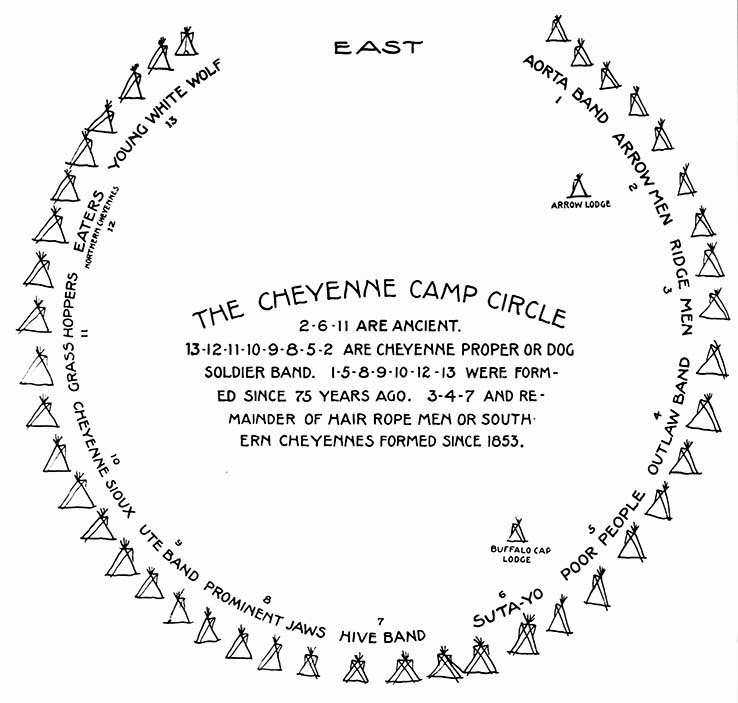 Is there anything "urban" about these big circular camps? Archaeologist Alice Kehoe thinks so. In her textbook, North American Indians, she says:


Nomad peoples were constrained to adapt social affairs to ecological cycles: most of the business that in towns [in other cultures] occurred over the year had to be compressed by the nomads into the few summer weeks when grass was most lush on the open plains. Trading, gambling, visiting friends from other bands, games and sports competitions, and seeking a compatible spouse or comrade were individual incentives to rendezvous in large camps. Adjudicating disputes, discussing policies and strategies for allied bands drew leaders to these camps. Above all, participation in rituals was a magnet (Kehoe 1981:
295). This is the first edition of the book; I have not had the opportunity to check this quote in the more recent 3rd edition.


I really like Kehoe's observation that activities that can be spread out through the entire year in permanent settlements must be concentrated into a few weeks in these large camps.  A few years ago I talked about three major dimensions of urbanism that are used in defining cities: population, complexity, and influence. Big tipi camps did not have urban functions. That is, they were not the setting for activities and institutions that affected  a hinterland. Nor were they permanent settlements, part of Louis Wirth's influential demographic definition of urbanism.

On the other hand, these large tipi camps were large dense settlements (if not permanent), and they certainly had a level of social complexity and intense social interaction that was not present in the smaller regular camps. This is the feature described in Kehoe's quotation above. And this is why I have called these tipi aggregation camps "semi-urban settlements," comparable  to pilgrimage sites, festivals, camp meetings, refugee camps, and some contemporary RV camps. These are places that are formed rapidly by an influx of people, who live in a densely-arranged form for a few days to a few weeks before dispersing. See my previous post on semi-urban settlements.That post describes an article I wrote with a bunch of students on neighborhood organization in semi-urban settlements. That paper is STILL in press; the journal is taking forever to get the paper into print. Arrrrrgh........

I've listed below some sources on Plains tipi camps. Roland Fletcher's paper first suggested to me that this kind of settlement was relevant to concepts of urbanism. Banks and Snortland is a fantastic study that uses historic photographs to work out the nature and size of Plains settlements. Hassrick and Oliver are standard monographs on Plains Indian groups. Scheiber and Finley use advanced methods to identify the archaeological remains of ancient tipi sites.

Examples like these Plains circular tipi camps are fascinating for illuminating the nature of urbanism. They have some but not all of the traits we normally associate with cities and urban places, and as such they help us understand the nature of human society and how it works out in spatial terms. When large number of people gather quickly, whether in a tipi camp or at the Burning Man festival today, certain kinds of interactions take place and certain kinds of social dynamics play out.

While no one would call a tipi camp a "city", these settlements are certainly part of the Wide Urban World. 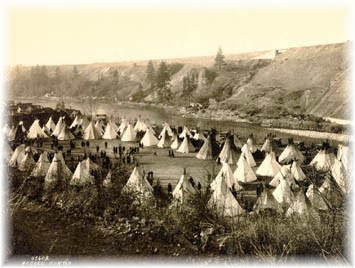 Oliver, Chad  (1962)  Ecology and Cultural Continuity as Contributing Factors in the Social Organization of the Plains Indians. University of California Press, Berkeley.

Email ThisBlogThis!Share to TwitterShare to FacebookShare to Pinterest
Labels: Nomads, Semi-urban places, Tipis
Newer Posts Older Posts Home
Subscribe to: Posts (Atom)
"Wide Urban World" is a blog about cities as viewed from a broad historical and comparative perspective. As Winston Churchill said, "The farther back we look, the farther ahead we can see."