How do big cities differ from small cities (in the ancient past and today)? 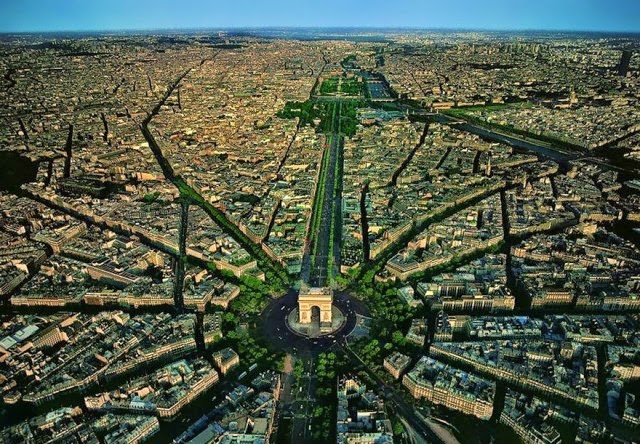 Are big cities different from smaller cities mainly in their size? Or do they differ in other ways that go beyond simple population size? Recent research on urban scaling has answered this question definitively for contemporary cities. Large cities ARE different from smaller cities in ways that transcend their size. They aren't simply larger. Yet many of the changes that come with size turn out to be linked systematically to population size.

For example, large cities of course have more miles of roads and and electrical cables than smaller cities. But when we look at roads or cable per person (miles per capita), the quantities are smaller for the biggest cities. This makes sense: if you have twice as many people in a city, you don't need twice as many roads, since some of the new people can use existing roads. While this much is obvious, quantitative research in urban scaling reveals a surprising finding: the way that the miles of roads per person changes with city size is extremely regular. The same quantitative relationship holds if you are studying cities in the U.S., in Europe, or other parts of the world. There is a basic underlying regularity to the quantities of urban infrastructures that get built and used, in cities all over the world.

Other types of regularities have been found by the urban scaling researchers. First, big cities have denser populations than smaller cities. One way to view this is that the areal extent of cities grows more slowly than does the population. The result is an increasing population density in larger cities. But again, this patterns is extremely regular and predictable mathematically. Second, the most remarkable regularity identified by urban scaling has to do with socioeconomic outputs. Whether you measure income, wealth, innovation, crime, poverty, or the number of rock bands, these features all increase more rapidly than does the population size. Big cities not only have more rock bands than smaller cities, but they have more rock bands PER PERSON than smaller cities. Furthermore, the mathematics are predictable. The rates of rock bands--or poverty, or patents--per person follow a very regular quantitative pattern. 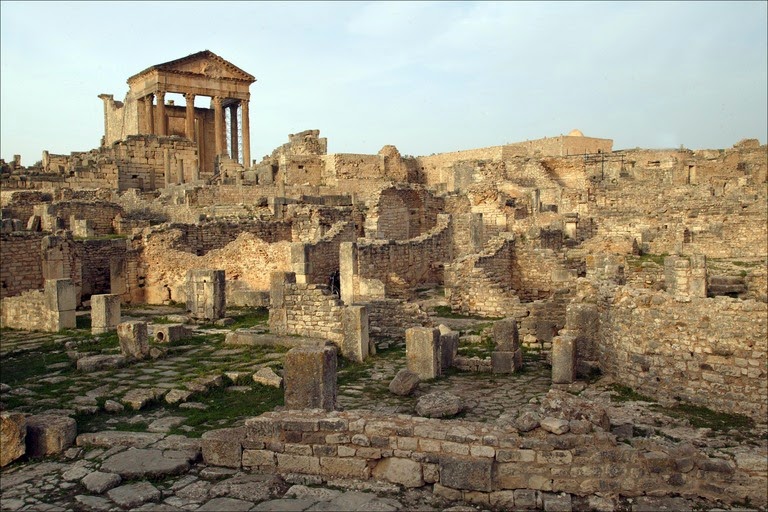 So far, I have been describing urban scaling research on modern cities. See the works of Luis Bettencourt and his colleagues listed below for more information, or see my earlier post on this research. But what about cities and settlements before the modern era? A new paper, published today, provides new evidence that similar predictable quantitative patterns are found in ancient cities. That is, Precolumbian settlements in central Mexico exhibit the same quantitative regularities in population density and social outputs as modern cities. Of course the society, the economy, and the nature of cities were very different back then. But still, the same quantitative patterns are present. To me, this is a remarkable finding.  The paper is:

This is an update and extension of their prior paper:

The authors analyze settlement size and other data from the Basin of Mexico Archaeological Survey Project  (Sanders et al, 1979), and find that the quantitative patterns match those predicted by models of urban scaling that were first worked out for contemporary cities (Bettencourt 2013). I find this line of research fascinating, to the extent that I have been measuring cities and the sizes of their central plazas to investigate the quantitative pattern. It turns out that the size of the central plaza relates to the overall city size in a quite regular pattern, but the form of the equation does not match any of the quantities measured for modern cities. Hmmmmmmmm. I'll write more on this later.

For now, the new paper by Ortman et al is important for several reasons:

Here are some publicity and news items about today's new paper:

An article by Emily Conover in Science Online

An article by Megan Gannon in LiveScience. 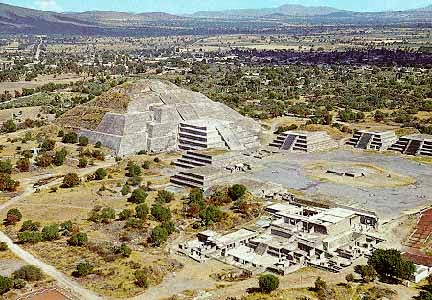 Bettencourt, Luís M. A., José Lobo, Dirk Helbing, Christian Kühnert, and Geoffrey B. West
2007    Growth, Innovation, Scaling, and the Pace of Life in Cities. Proceedings of the National Academy of Sciences 104: 7301-7306.

Bettencourt, Luís M. A., José Lobo, Deborah Strumsky, and Geoffrey B. West
2010    Urban Scaling and its Deviations: Revealing the Structure of Wealth, Innovation and Crime Across Cities. PLoS One 5 (11): 1-9.

Posted by Michael E. Smith at 4:46 PM No comments:

I am posting from the Arizona State University archaeology facility in San Juan Teotihuacan, Mexico. I've just spent three days at the site of Teotihuacan, exploring the outer neighborhoods of the ancient city and learning about geophysical techniques applied to archaeology. I am considering using geophysics at Teotihuacan, so I came down to see Luis Barba and his team at work. Luis is collaborating with David Carballo, who has been working in the southern Teotihuacan neighborhood called Tlajinga, exposing apartment compounds by both excavation and geophysical prospecting. Check out his project website.

Geophysical prospecting is one of the "magical" tools available to archaeologists. We can see what lies beneath the ground surface without excavating.
Luis Barba (Instituto de Investigaciones Anthropológicas, Universidad Nacional Autónoma de México) is the leading archaoemetry specialist in Mexico (I can't get blogger to insert accents! Aaarghhh). He does geophysical research, archaeological chemistry of soils and artifacts, and other scientific studies. He and David spent the whole week doing geophysical work in the Tlajinga area, and I arrived Wednesday to see the fieldwork first-hand. Luis's team includes two members from his lab at UNAM: Jorge Blancas and Agustín Ortiz. Also, Meztli Hernandez Grajales of the Escuela Nacional de Antropologia e Historia, and Ashley Krauss of Yale University joined the crew for the week.The goal was to locate the outlines and some inner walls of apartment compounds in the Tlajinga area.

Luis uses three main methods. The fastest method is magnetometry (see photo). They grid off a 20 by 20 meter square, and carry the instrument down the grid lines, taking four readings on the gradiometer per meter. This generates quantitative measurements of the magnetic properties of the subsoil, which is useful for archaeologists because the magnetic signatures of buried structures and features often contrast with the surrounding soil. The second method is electrical resistivity. Two probes are placed in the ground away from the sampling area, and then two metal probes are inserted into the ground at set intervals, again following the grid lines. Luis let me try this for a few passes (see photo). For these techniques, the data are uploaded, and maps can be generated very quickly to serve as guides to further steps.

The most sophisticated and complicated geophysical technique is ground-penetrating radar ("GPR"). The device is dragged along the ground (the orange box in the photo), and a wheel records the distance traveled. The instrument sends radar waves into the ground, and registers the waves when they are reflected back up. GPR is far more sensitive and precise than the other methods, but it requires a large amount of processing and analysis after fieldwork is complete. While we could look at the day's magnetometry maps each evening, it takes much longer to make the GPR results available.

I have always been fascinated by geophysical prospecting, but I haven't had the opportunity to use the methods in my research, and I didn't have up-close experience with the fieldwork. This was a great experience, and I am considering a possible fieldwork project with Luis and David, to expand their approach to other parts of Teotihuacan.

The Tlajinga neighborhood includes the central avenue at Teotihuacan, the Street of the Dead. In the main INAH archaeological zone, which is open to tourists, the street is paved, and lined with ceremonial structures. Down in Tlajinga it was evidently not paved, and was in fact a channel dug out of the underlying tepetate bedrock. This photo is looking north up the Street of the Dead from the Tlajinga area. You can just see the Moon Pyramid at the upper end of the street; I include a close-up from the center part of this photo with arrows pointing to the outline of the pyramid.


I also saw the excellent new museum,the Beatriz de la Fuente Museum of Teotihuacan Mural Paintings. In addition to having many of the actual wall paintings on display, several entire painted rooms are reconstructed at the museum. Also, the museum is integrated with a 3-temple group that was excavated a number of years ago (see the photo at the top of the post). These were probably neighborhood temples. The photo shows one of them, with the huge Pyramid of the Moon in the background.

I have been staying at the ASU archaeology facility in the town of San Juan Teotihuacan. This is a major storage facility, with many important artifact collections from Teotihuacan and nearby sites. There is space for artifact analysis, and living quarters for people using the lab or doing fieldwork.

In the photo the two-story storage/analysis building is at the left. On the right are three small cabins with beds and bathrooms (I am staying in one of these). The doorway at the end of the driveway leads to the "Casa antigua," an old house that has bedrooms, a kitchen and common space, in addition to technical workspace and some storage. The tree behind the doorway is in the yard of the house.

Email ThisBlogThis!Share to TwitterShare to FacebookShare to Pinterest
Labels: Geophysical methods, Teotihuacan
Newer Posts Older Posts Home
Subscribe to: Posts (Atom)
"Wide Urban World" is a blog about cities as viewed from a broad historical and comparative perspective. As Winston Churchill said, "The farther back we look, the farther ahead we can see."