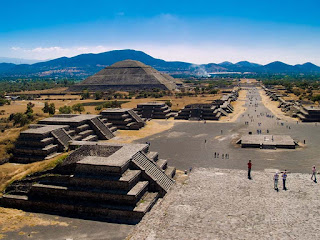 What is is about cities that makes them exciting and dynamic? Things are happening in cities and people are attracted to them. As Jane Jacobs said, “Cities have the capability of providing something for everybody, only because, and only when, they are created by everybody.” Some cities never sleep. Cities are the setting for activities that just aren't found in smaller settlements. The more people in a city, the more activity and the more excitement. This is not just a feature of contemporary cities:  ancient cities like Teotihuacan were also bustling, dynamic, and attractive places. Architectural historian Spiro Kostof coined the term "energized crowding" to describe this aspect of urban life and society. 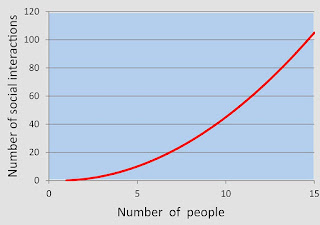 Energized crowding doesn't just describe the condition of life in cities - it describes the basic social forces that lead cities to grow and to transform life and society. This is the basis of the work on settlement scaling by the Social Reactors Project: me and Jose Lobo at Arizona State University, Scott Ortman at the University of Colorado, and Luis Bettencourt at the Santa Fe Institute. Check out our website. In our model, the process of energized crowding turns cities into social reactors.

As the number of people in a settlement increases, the number of potential social interactions grows at an exponential rate (see graph). As settlements grow larger, the effects of social interaction are amplified. These include positive, negative, and neutral effects. Let's start with the negative side of things. As we as individuals have to deal with more and more people, we get overloaded. Too many people, too much going on. This is called scalar stress. Some of the effects are highly negative--more people means more crime, more poverty, more social alienation. But scalar stress is offset by one of the big "nuetral" effects of growing settlement: the formation of neighborhoods. As cities grow, people adjust their activities so that they can live life on a smaller scale--the neighborhood. As I have said many times in this blog, neighborhoods are one of the very few universals of the urban experience. Here are a few posts on this (out of many.....):
But there are also positive effects of energized crowding. Urban economists and economic geographers have known for a long time that when businesses and industries concentrate themselves in cities, it leads to economies of scale and thus major gains in productivity. These effects are called agglomeration effects, as in this diagram:

But it turns out that the positive effects of concentration and energized crowding are not limited to the modern industrial economy. In fact, they occur in cities before the industrial revolution, whether medieval European cities, or cities in the Roman or Inka empires. This fact alone shows that these effects are not due to factories, wage labor, advanced transportation, or other attributes of modern economies. In fact, these effects arise primarily out of the very act of social interaction within the built environment.

This realization was a real breakthrough in our understanding of the nature of city size and its role in generating the social and economic properties of cities. The key paper is Bettencourt (2013). Luis derives a quantitative model that predicts characteristics of cities based on their sizes, within a given region or urban system. The beauty of the model is that its conditions are general enough to fit cities before the modern era. In fact they also should work for non-urban settlements in agricultural village societies (and they do!). 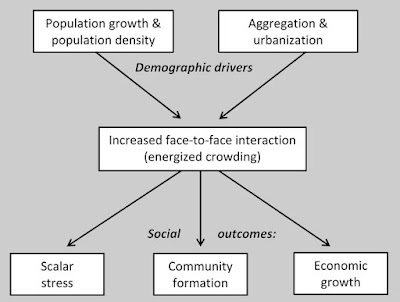 In the time since Luis's 2013 article, our group has been scouring archaeology and history for cases where we can try out the model. Scott Ortman initiated this work with his studies of the settlement in the prehispanic Basin of Mexico. We've published a number of studies, and a bunch more are in the pipeline. Scott has even found the same scaling effects in village societies. The data requirements are heavy (a sample of 30 or more settlements from a given region and time period, with population estimates and other quantitative data to scale against population). If you think you know of any such cases, please let me know!

We have found the same quantitative relationships in modern and ancient settlement systems. This suggests that the same or very similar fundamental social processes operate when humans come together in settlements, whether today or two thousand years ago. Energized crowding--which is at a much higher level in larger settlements--has measurable effects on the density of settlement, and on the levels of economic and social outputs. In this figure, Graph A shows economic output measures for the modern U.S. economy, while Graph B shows wealth output for the ancient Inka economy. Quantitatively these two graphs are nearly identical. Both exhibit "superlinear scaling," with beta coefficients of 1.13.

So, how far can we push these relationships? Are they universal? Well, not quite. Hunter-gatherer campsites show very different patterns from the agricultural societies we have studied so far. This is something we are working on now. But for most systems we have examined, we find similar patterns, and when we apply Luis's model, we conclude that energized crowding turns settlements into social reactors.

For some other posts on the scaling work, see:
See our project website for more information.