Here are the top ten reasons why Teotihuacan is the most important ancient city of the Americas.

(1) Teotihuacan was one of the earliest cities in the New World.

I hesitate to call Teotihuacan THE earliest city, for several reasons. First, that designation depends on one's definition of city and urbanism; and second, archaeologists continue to locate new cities and provide better dating for known cities. Nevertheless, Teotihuacan ("Teo" for short) was AN early city in central Mexico, certainly the earliest large city in the region. Teo was founded several centuries before Christ, and it reached its height between about 200 and 600 AD.

(2) Teotihuacan was one of the largest cities in the world.

Population estimates for Teotihuacan range from under 100,000 to as many as 200,000 residents, living in an urban area larger than 20 square km. Early in its period, Constantinople had over 400,000 residents, and by the end of Teo's height Chang'an in China had that many people or more. Teotihuacan was not far behind, and it was clearly the largest city in the New World.

(3) Teotihuacan was the most extensively planned ancient city in the New World.

After an initial period of settlement, the city of Teotihuacan was rebuilt following an orthogonal grid plan. Nearly every one of the several thousand buildings was lined up with the approximately North-South alignment of the "Avenue of the Dead." While I have written articles arguing that ancient urban planning was far more varied than just the grid plan (see article here), the degree of central political control implied by the Teo grid is impressive. The city's rulers clearly had considerable power to enforce their will, destroying irrigated farmland for urban development, and making all buildings conform to the main grid. Urban planning in ancient cities can be measured by the degree of coordination among buildings and spaces (very high at Teo), and by the area to which the planning is applied (again, large at Teo).

(4) Teotihuacan looked more like a modern city than other ancient cities did. 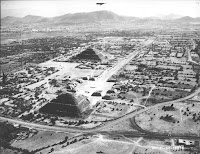 Of course past cities should be judged on their own merits, and their resemblance (or not) to modern cities is irrelevant to how we understand their operation and significance. But on the other hand, the resemblance of Teotihuacan to modern cities is striking, and that is an interesting observation. The major features that the city shares with U.S. grid-planned cities (such as Phoenix) include: its use of orthogonal grid planning; its large size; its overall spatial pattern, with big civic buildings in the center and low-rise residences spreading out for miles; and its location in a semi-arid environment where irrigation agriculture was important. So what do these similarities imply? Good question. Minimally, this is just one of many fascinating traits of Teotihuacan.

(5) Teotihuacan was the setting for a radical social experiment.

Teotihuacan stands out as radically different from most Mesoamerican cities along a number of social dimensions. First, the orthogonal planning is highly distinct. Second, the housing (large multi-family apartment compounds) is far more standardized and regimented than in other cities. Third, many of the artifacts seem greatly standardized. And fourth, we have virtually no information about the rulers of Teotihuacan. There are no sculptures or paintings of their faces, and archaeologists are not even sure which building was the royal palace. Many Teotihuacan scholars think that these features are evidence for a radical social experiment in regimented and anonymous living. From my perspective as an urban scholar, I am impressed by the complete divergence of Teotihuacan from older and established canons of Mesoamerican urban planning (I have an earlier post on this). Again, the urban layout points to a radical social change early in the city's history.

(6) Teotihuacan influenced later societies such as the Toltecs and the Aztecs.

The capital cities that followed immediately upon Teotihuacan's collapse--Xochicalco, Teotenango, Cacaxtla, Xochitecatl--all returned to ancient Mesoamerican principles of urban planning and layout. Their rulers apparently rejected the Teo innovations (grid planning, arranged around an avenue rather than a plaza, etc.). While some of my colleagues have claimed that the next really large city--Tula (height, AD 900-1100)--was a copy of Teotihuacan, in fact Tula fits in with those other cities listed above in following the basic Mesoamerican urban plan. The rulers of Tula evidently rejected the Teo innovations also. But when the Aztecs came along (they were immigrants from northern Mexico), they were really impressed with the ruins of Teotihuacan and Tula. While the Aztecs invented stories that their kings were descended from the kings of Tula, they looked to Teo as the origin of the universe. Several of the Aztec origin myths were set in Teotihuacan, and the names we use today (such as "Pyramid of the Sun" and "Avenue of the Dead") were in fact the names that the Aztecs gave to the ruined features of Teotihuacan. Aztec kings even went to excavate at Teo, and brought back Teo objects to bury as offerings at the major temple.

(7) Teotihuacan’s trading and conquests affected much of Mesoamerica.

The foreign influence of Teotihuacan was greater than any other Mesoamerican city. First, Teo was capital of a small empire that conquered much of central Mexico. While this empire was far smaller than the later Aztec empire, two other kinds of Teo influence stretched farther afield than the Aztecs managed to go. Teotihuacan engaged in trade with most of the known parts of Mesoamerica. Its merchants or officials controlled the major obsidian quarries near Pachuca, and the distinctive green-tinted Pachuca obsidian was traded by Teotihuacan merchants to the Maya region and beyond. Indeed, even a central Mexicanist like me managed to excavate some green obsidian blades in the six months my wife and I worked at the Maya city of Copan in Honduras. And then another kind of Teo influence--architectural and royal styles--also spread throughout Mesoamerica, including the Maya realm. Teo style was the "in" style, the "Gangnam style," of its period. Kings all over Mesoamerica built temples in the distinctive Teo style, and Teotihuacan royal costume elements became the rage among Maya kings. No Aztec empire, trade, or stylistic influence spread nearly so far as that of Teotihuacan.

(8) Teotihuacan is one of the most extensively studied ancient cities in the Americas.

Countless archaeologists have worked at Teotihuacan over the decades. Formal archaeological work started in the nineteenth century. Mexican teams cleared much of the architecture along the Avenue of the Dead in preparation for the Mexican Olympic Games in 1968. René Millon and George Cowgill mapped the city in its entirety in the 1960s and 1970s.  William Sanders surveyed the surrounding countryside in the 1950s and 1960s. Many projects by Mexican, U.S., European, and Japanese archaeologists have uncovered the apartment compounds and temples of Teotihuacan. Rubén Cabrera has excavated counless buildings at Teo, and Linda Manzanilla has directed a varied program of high-quality recent fieldwork at the site. Several excavation projects have located royal tombs under the  main pyramids at the site. There are two major continuously-functioning laboratories at the site, one sponsored by the Mexican government and one by Arizona State University. My colleague George Cowgill is the preeminent Teo scholar today, and his publications give the best overviews of the site.

(9) Teotihuacan is a World Heritage Site visited my millions of tourists each year.

The importance of Teotihuacan is recognized all over the world, and millions of tourists visit the site each year. While this volume of visitors can damage the ruins, there are many benefits of public exposure. People learn about the Mexican past, about the work of archaeologists, and about the distinctiveness of a great ancient city. The site is an official UNESCO World Heritage site.

(10) I wrote my senior honors thesis on Teotihuacan

Okay, so this is not really a reason for the greatness or importance of ancient Teotihuacan. But for me, writing a senior honors thesis on Teotihuacan (directed by George Cowgill at Brandeis University) was a transformative experience. Intellectually, that project stimulated and cemented my interests in Mesoamerican archaeology and in the study of ancient cities. I lived for a summer in San Juan Teotihuacan, a village built on top of the ancient city, and split my time between working in the Teo laboratory and doing fieldwork with William Sanders (and visiting Tula; see photo). I left Mexico that year in love with the country, the people, the food, the music, and (especially), the archaeology. And after several decades, I am still going back to central Mexico every year.

A Few Publications on Teotihuacan: