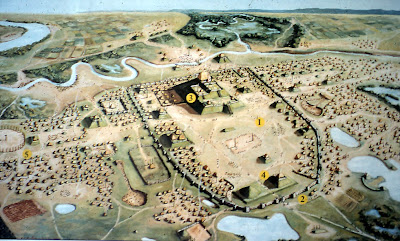 The Mississippian center of Cahokia, in Illinois across the Mississippi from St. Louis, is one of the great cities of the ancient world. I have a special reason for discussing Cahokia now: there is a challenge taking place to raise funds to help preserve the site. This is the "This Place Matters Community Challenge,"  a contest presented by the National Trust for Historic Preservation.  The top three sites will receive a cash prize to help preserve their site.  The challenge hopes to "highlight the important role that historic buildings and properties play in preserving our national heritage as well as in preserving our environment." While I don't want to belittle the other historical structures and districts that are participating, in my mind none of them is anywhere close to Cahokia in its world importance. Please go to the website and cast your vote for Cahokia. And here are some reasons why you should do that.

From the perspective of the Wide Urban World, Cahokia presents an important addition to the roster of urban forms around the world. It was a city by any definition, but a distinctive city from a tradition of urbanism that is not widely known or appreciated. The site needs better preservation today, and you can help by following the links to the contest.

Finally, here is what the Cahokia Mounds people have to say about why you should vote for Cahokia:

This place matters to our community because it is a place that preserves the cultural and historical remains of this 1000 year-old economic, residential, and religious center of Mississippian culture. Cahokia was the center of a large metropolitan complex that included four other major mound centers, a number of single-mound local centers, and numerous small villages, hamlets and farmsteads.  Evidence of Cahokia's influence has been found as far away as Minnesota, Florida, Oklahoma, and Georgia.  The state property preserves the central portion of the site, but about 1/3 of the original city lies outside of this boundary and is threatened by contemporary activities.  Funds are needed to acquire and preserve these threatened areas.   Our community stands to lose much information about America's first city if 1/3 of the site is destroyed.  Not only does this site preserve and interpret Mississippian culture for our community, the nation, and the world, but it also fosters a sense of preservation and prehistoric appreciation, educates on the science of archaeology, and the achievements of ancient Native Americans. This place matters to all Americans, and is a pivotal point in American History that deserves to be shared.
Again, click here for the link to the contest.

To read more about Cahokia, try some of these works:

I want to thank Elyse Butler, a Graduate Research Assistant at Cahokia Mounds, for bringing the contest to my attention, and for supplying the text quoted above.
Posted by Michael E. Smith at 1:22 PM 2 comments:

I have just come across some current research by evolutionary biologists and anthropologists on social life and cooperation in urban neighborhoods. I first ran into the Binghamton Neighborhood Project: Science-Based Solutions to Real-World Problems in Our Community  by accident on the internet. This seems at first a strange project: the website mostly talks about community involvement issues: liveable communities, designing parks, relations with city hall and the like. But on their publications page, the articles consist of applications of evolutionary biology to neighborhood organization. David Sloan Wilson, a prominent biologist at Binghamton, is the author of some of the papers. Here are some examples:

Next, I found an ad for a talk at Binghamton in April 2011, by evolutionary anthropologist Daniel Nettle (of Newcastle University, UK), on a similar topic: "The Tyneside Neighbournood Project: Investigating the Behavioural Ecology of a British City." I rooted around a bit to see if Nettle had published his work, but this is a current project that hasn't come out yet in print. But, Nettle's talk was recorded, and is available on the internet here.

This is a fascinating talk. Nettle works in the field of behavioral ecology and evolutionary anthropology, and he applies these perspectives to differences in cooperation and social life in two neighborhoods in Newcastle. He describes the settings (a poor and a wealthy neighborhood) and investigates how three methodological approaches to cooperation and social behavior relate to one another: economic games, social capital surveys, and observation of behavior.

The city as a practical machine

This phrase, "the city as a practical machine," is taken from Kevin Lynch's important book, A Theory of Good City Form (MIT Press, 1981). Lynch talks about temporary constructions like military camps, cities built for protection, and colonial cities. These are settlements built quickly in order to address particular practical concerns.

I am working on a new analysis of this kind of settlement. So far I have a provisional classification, and in the fall a group of students will refine this and carry out analyses and comparisons of various types of practical settlements that fit Lynch's overall category. This is part of the research project, "Urban Organization Through the Ages: Neighborhoods, Open Spaces, and Urban Life."

Here are some of the types:


In addition there are some other settlements and architectural types that may fit here:

So what do these various settlements have in common? As pointed out by Lynch, they are practical settlements, built for a specific purposes, often in haste and often as a temporary settlement. They tend to have some common spatial attributes, including highly planned layouts and physical separation from other settlements.

What can they tell us about urbanization in general? Well, this is a major question for our research project next fall. Stay tuned for more information.
Posted by Michael E. Smith at 12:10 PM 1 comment:

Email ThisBlogThis!Share to TwitterShare to FacebookShare to Pinterest
Labels: City as a practical machine, Planning
Newer Posts Older Posts Home
Subscribe to: Posts (Atom)
"Wide Urban World" is a blog about cities as viewed from a broad historical and comparative perspective. As Winston Churchill said, "The farther back we look, the farther ahead we can see."