Round Lake: From Methodist Camp Meeting to Modern Village 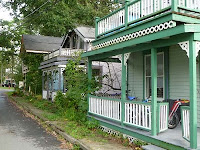 The village of Round Lake is located in Saratoga County, NY, between Albany and Saratoga Springs. It stands out in upstate New York for its unusual layout and architecture. I used to live in Saratoga County, and I was always intrigued when I drove through Round Lake. The village consists largely of houses in Victorian style (gingerbread molding, steep gables, front porches, etc.), but many are small cottages, far smaller than most Victorian style houses in the U.S. The houses are located very close together, but with parks and open spaces throughout the settlement. The streets are narrow and laid out in a generally concentric wagon-wheel arrangement around a large wooden assembly hall in the middle. There is an old Victorian style hotel at the edge of town, but the village has few stores or other businesses. Interesting, quaint, and charming, the architecture and layout of Round Lake stands out like a sore thumb in the region around Albany,  New York. 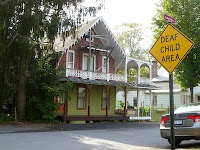 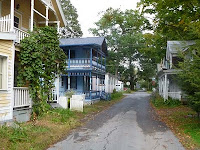 Last spring, as part of an ongoing investigation into semi-urban settlements, I began reading about religious camp meetings. As I looked at their spatial structure, it dawned on me that Round Lake must have originated as one of these summer religious camps. They contain numerous small and insubstantial shelters—usually tents or cabins—arranged around a central circular clearing in the woods where the preaching takes place. Some have a simple elevated open-air stage, and some have more substantial preaching halls. As temporary summer camps, there is no need for a large number of permanent businesses. It seems that in Round Lake, a camp meeting settlement had turned into a permanent village.

Last week my wife and I found ourselves back in the Albany area with a few hours to kill, so we headed over to Round Lake to see whether my interpretation was correct. The first thing we noticed was a historical marker (New York State has great roadside historical markers) that confirmed the village’s origin as a Methodist camp meeting site in the late nineteenth century. We walked around and took some photos (seen in this posting) and talked to some residents. At the Public Library we purchased a history of the town, written in the local history genre. The book is:

Round Lake was founded in1868 by the Methodist-Episcopal Church of the Troy Conference. The Rensselaer and Saratoga Railroad stopped at the site, and the first meeting that summer drew 8,000 people! The first preaching, as at many camp meetings, was done from a raised platform built of wood. Attendees stayed in tents. In 1874 Ulysses Grant attended the meeting, and in 1885 the large auditorium was built, with a pipe organ.In 1887, the religious association that had organized the events was changed legally to the Round Lake Association, giving the settlement a broader base than just a summer religious revival camp.By the end of the nineteenth century, secular educational and cultural events had been added to the program, alongside the religious meetings.


Over time, people started building more permanent structures, small wood frame houses in the Victorian style. Wealthier residents built larger houses, and temporary guests stayed in one of several hotels, one of which still survives. Today, the village of Round Lake is a charming place whose residents see themselves as friendly neighbors. Even the librarians, who are not from the village, noted the friendliness of the residents and the open, public aspect of life in the village.

The history book mentioned above has some fascinating facts about early Round Lake. In 1878 an entrepreneur built a scale model of the holy land on the shore of the lake, including a large diorama of Jerusalem. Visitors could wander around Mount Lebanon and Galilee, and hear one of the two daily lectures at the park. In 1887 the George West Museum of Art and Archaeology opened in the village, and through good fortune came to house an ancient Egyptian mummy excavated (looted?) in 1881 at Thebes. And we are told that in the winter, people raced horse-drawn buggies on the frozen lake. When I lived in Saratoga County I saw truck races on the ice of the same lake.

Weiss, Ellen  (1987)  City in the Words: The Life and Design of an American Camp Meeting on Martha's Vineyard. Oxford University Press, New York.

Email ThisBlogThis!Share to TwitterShare to FacebookShare to Pinterest
Labels: Origins of modern settlements, Semi-urban places
Newer Posts Older Posts Home
Subscribe to: Posts (Atom)
"Wide Urban World" is a blog about cities as viewed from a broad historical and comparative perspective. As Winston Churchill said, "The farther back we look, the farther ahead we can see."