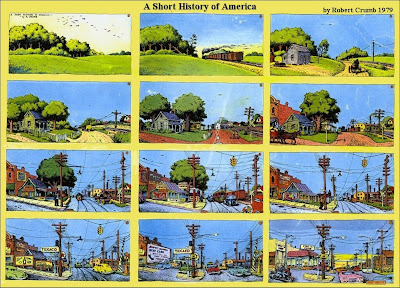 For most people, the terms "urban" and "rural" conjure up different kinds of places, different kinds of contexts. Urban is cities: dense populations, lots of activity, good access to markets and goods, not much green space, dirty streets. Rural is farms: open land, not many people, boring and tranquil, distant from the busy city. R. Crumb's sequence "A Short History of America" (above) exemplifies this standard view; in this case, a transition from rural beauty to urban ugliness.

But there are other ways of viewing rural and urban. Anthropologist Anthony Leeds, for example, suggested that the terms rural and urban are best used not as opposites, but rather as terms for different settings within a single society:

any society which has in it what we commonly call "towns" or "cities" is in all aspects an "urban" society, including its agricultural and extractive domains . . . the terms "urban" and "rural" come to stand to each other not as opposites and equivalents. Rather, the inclusive term describing the whole society is "urban" while the term "rural" refers only to a set of specialties of an urban society characterized by being inherently linked (under any technology known) to specific geographical spaces. (Leeds 1980:6-7)


I like this viewpoint very much, partly because it helps make sense out of some of my archaeological findings at Aztec sites in the central Mexican state of Morelos. My first major excavation project after my Ph.D. focused on "rural" sites: small sites located far from the urban centers of the time. As I described briefly in this blog a couple of years ago, I was initially surprised to find what seemed to be "urban" traits at these sites: an active economy, many imported goods from all over Mesoamerica, complex social and ritual activities, and participation in the current widespread styles of the day. I had expected to find poor, isolated, downtrodden peasants. Instead I found wealthy, prosperous, and well-connected farmers.

So, "rural" Aztec sites had "urban" traits. I then went on to excavate at an urban Aztec site, Yautepec. My initial expectation there was that if the peasants were prosperous and successful, the urbanites would be fabulously wealthy and well-connected. But instead, the urban households were almost identical to the rural households in many respects:

From the standard view of rural and urban as opposites, these findings are simply bizarre. But from the view of Anthony Leeds, they make more sense. There is no inherent reason why urban residents could not practice agriculture, or why rural residents could not be wealthy and well-connected to the outside world.

I am not saying that rural and urban contexts were the same in Aztec central Mexico. Yautepec had more elites running around, and there was a royal palace. Yautepec almost certainly had a tall pyramid dedicated to the patron god where victims were sacrificed periodically. There were more economic specialists in the city. But still, rural and urban life were just not all that different in this part of central Mexico.

Why was this? Well, I am out of space here and can't go into the details. But here are three quick reasons: (1) Aztec commoners in this area belonged to an organization called a calpolli that structured rural and urban life in similar ways. (2) The Aztec marketing system was extensive and efficient, bringing goods, ideas, and styles to rural as well as urban people. (3) These particular farmers (both urban and rural) had a big advantage over their cousins in other areas: they could grow cotton, which could be woven into money (literally).

I discuss Aztec rural and urban contexts in my book, Aztec City-State Capitals, and in an article with Christian Isendahl. And I provide a longer answer in my new book, At Home with the Aztecs: An Archaeologist Uncovers their Domestic  Life (due out in February 2016).

So, the next time you see some nonsense about how rural and urban  are complete opposites (as in this photo; or rather, as in the text that labels it), think about the perspective of Anthony Leeds. Rural and urban are two different sectors of an urban society. Life in thees contexts may be very different, or it may be very similar.

Leeds, Anthony
1980    Towns and Villages in Society: Hierarchies of Order and Cause. In Cities in a Larger Context, edited by T. Collins, pp. 6-33. University of Georgia Press, Athens.

2016    At Home with the Aztecs: An Archaeologist Uncovers their Domestic Life. Taylor and Francis, New York.

Email ThisBlogThis!Share to TwitterShare to FacebookShare to Pinterest
Labels: Aztecs, Rural and Urban
Newer Posts Older Posts Home
Subscribe to: Posts (Atom)
"Wide Urban World" is a blog about cities as viewed from a broad historical and comparative perspective. As Winston Churchill said, "The farther back we look, the farther ahead we can see."