Inequality - the 99% in ancient times

The level of social inequality is on the rise in modern society, and we increasingly hear about the "One percent" and the "Ninety-nine percent." What were the patterns of inequality in ancient cities and their societies? This is a big topic, and I will just touch on a few aspects here. As with many urban topics, I believe that a better understanding of ancient forms of inequality can only improve our understanding of modern patterns. In this post I will make three points: (1) inequality was greater in ancient states than it is today; (2) ancient states had two social classes; and (3) inequality was regarded as the normal condition of the world. 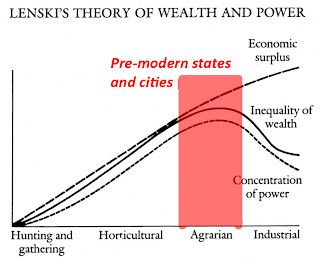 1. Inequality was greater in ancient states than it is today.

In the diagram, the highest levels of inequality (and concentration of power) came in what Lenski calls agrarian societies: these are ancient states plus more recent states prior to the Industrial Revolution. In modern times, the overall level of inequality has dropped, and that decline actually started in Roman times. Since the Roman Empire, the amount of economic surplus has risen greatly, but inequality has declined, largely because of the rise of more democratic governments. (This diagram only shows the broad outlines of history, and it is not meant to be accurate on a detailed scale, such as for the recent past).

Although there was much variation in the expression of inequality and patterns of social stratification among ancient states, one generalization stands out: most of these societies were divided into two social classes. (see my prior post on whether ancient cities had a middle class or not).Sometimes there was mobility between classes, and sometimes class boundaries were fixed by law and custom. The caste system of India was a particularly closed system of stratification, whereas mobility was easier in Roman society.  For more information see Trigger (2003) or Sjoberg (1960).

3. Severe inequality was regarded as the normal condition of the world.

In the words of Bruce Trigger, “inequality [in early states] was regarded as a normal condition and injustice as a personal misfortune or even as an individual’s just deserts rather than as a social evil.” (p.142). And, “The general pervasiveness of inequality ensured that its legitimacy went unquestioned.” (142). The medieval peasants in the above woodcut (from 1488) may not have been happy about paying taxes to their lord, but they rarely questioned the legitimacy of his position. For more discussion of this, see M.G. Smith (1966) or works by Charles Tilly (1998, 2001). Tilly has developed (in my opinion)  the best general theory for how inequality works in society. Most of his examples are from modern society, but his theory applies to the ancient world as well.

I don't have any grand conclusion to offer about ancient inequality. It is important not to draw simplistic implications from this kind of information. For example, the fact that inequality today is lower than it was in ancient Egypt or Rome does not mean that we should diminish the importance of rising inequality. In modern society, high levels of inequality generate many social (and moral) problems (Wilkinson and  Pickett 2009). A better knowledge about how inequality worked in the past, however, can help us understand modern inequality, and may even suggest some possible solutions

Sjoberg, Gideon
1960    The Preindustrial City: Past and Present. The Free Press, New York.

Email ThisBlogThis!Share to TwitterShare to FacebookShare to Pinterest
Labels: Inequality

I recent issue of the journal Science features a news article titled, "New Light on Revolutions that Weren't" (by Michael Balter, Science vol 336, 4-May-2012, pages 530-531). The article points out that several cultural transformations in human history that had been called "revolutions" in fact took far longer than had been thought (and, therefore, should not be called revolutions). One is sometimes called the "creative explosion" that signaled the final transition from early hominids to modern human creative cultural behavior (things such as complex tool making and creative aesthetic expressions). It turns out that several of the supposedly modern human traits actually developed closer to 300,000 years ago rather than the 50,000 year age of the supposed "creative explosion." The article goes on to suggest that some traits commonly gathered together under the label "Neolithic Revolution" (e.g., sedentism and plant domestication) actually started several thousand years earlier than had been previously thought.

So what about the "Urban Revolution"  Will that become the next member of the group of "Revolutions that Weren't"?? I'm not holding my breath. For the earlier transitions, these changes just reflect the normal course of the advancement of archaeological knowledge. For any given social transformation, at first we have few sites, little information, and not very good dating. As more fieldwork is done and sites are dated more precisely, changes that had looked sudden start to look more drawn-out. As I have talked about here in several posts (and in some scholarly articles; Smith 2009), the "urban revolution" refers not just to the origins of cities, but to the origins of complex, state-level societies. Urban origins was just one of a number of social transformations that were generally bundled together in different parts of the world. The other big changes were the rise of centralized state polities that could project true social power, the institutionalization of inequality into social classes, and the expansion of economic specialization and activity.

The term revolution, when applied beyond the limited domain of major political upheavals and transformations, generally has two components: A fundamental or major transformation; and a rapid transformation. Just as with the earlier revolutions, archaeologists are finding that inequality did not originate with the earliest states, and that cities can exist in chiefdom societies (previously thought to be pre-urban). So it is not surprising that the Urban Revolution may have taken longer to happen than previously thought. But what has NOT changed is the fact that the Urban Revolution was the single most far-reaching social transformation in the human past. Life in early urban state societies (in, say, Egypt or Mesoamerica) was radically different from life in the Neolithic (tribal farming) societies that preceded them.

With the Urban Revolution, former freedoms and independence (of individuals, households, and communities) were replaced by servitude, taxes, rules and regulations. Society and human life would never be the same again. Two of the clearest descriptions of this process were written by anthropologist Marvin Harris. One is a chapter in his book, Cannibals and Kings called "The Origins of Pristine States" (1977, Vintage books). The other is an essay called "Life without Chiefs," which is posted online. An excellent early scholarly treatment of the archaeological evidence for the Urban Revolution in Mesopotamia and Mesoamerica is Robert McC. Adams' book The Evolution of Urban Society (1966, Aldine Press). For a review of recent thinking on the topic, see my paper on V. Gordon Childe and the Urban Revolution.

So the Urban Revolution is not going to become a "revolution that wasn't" any time soon. Social life was changed far more drastically than during the earlier creative explosions or Neolithic Revolution, or in the later Industrial Revolution. We should not give in to attempts by evolutionary psychologists and some other evolutionary thinkers to pretend that the Urban Revolution never happened. They assert that human society went from tribal ancestors directly to the present, without much of a change in organization or complexity. See my post Deep history vs. the urban revolution on this.

The Urban Revolution was a very big deal in the human past.

Posted by Michael E. Smith at 4:14 PM No comments:

Email ThisBlogThis!Share to TwitterShare to FacebookShare to Pinterest
Labels: Urban Revolution
Newer Posts Older Posts Home
Subscribe to: Posts (Atom)
"Wide Urban World" is a blog about cities as viewed from a broad historical and comparative perspective. As Winston Churchill said, "The farther back we look, the farther ahead we can see."