Does urbanization cause social breakdown? Are cities places of chaos and crime, where values go out the window? Few people today would answer this question in the positive, although this was social science dogma in the early 20th century (Wirth 1938), until ethnographers like Oscar Lewis (1952) showed that the chaotic cities view was biased and inaccurate.

What about shantytowns and squatters settlements: are these places of chaos and crime and social breakdown? I'll bet that more people would accept this view today than would accept my first question. But like the first question, this viewpoint is a stereotype that is more often inaccurate than correct.  Again, it was ethnographers who went out and lived in these settlements who showed that the sterotypes are wrong (Mangin 1967; Schlyter and Schlyter 1979), but they still persist in the public, among government and civic authorities, and even among scholars.

I think one reason for the endurance of this kind of stereotype is a confusion between visual order and social order. Visual order refers to the kind of regularity in layout that can be perceived by urban residents as well as by those looking at maps or urban photographs. Settlements that are irregular in layout lack visual order. Social order is a deeper and more difficult concept; indeed it has been one of the key issues in sociology and social science for a century (see Hechter and Horne 2003). Briefly, social order refers to the way social groups and societies "hang together" and continue through time in ways that allow many or most people to live "normal" lives.

This diagram shows the way many people think that order works in informal or squatters settlements. 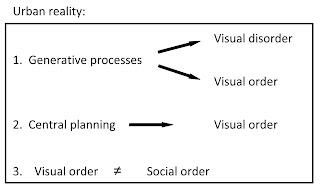 The big difference between these two views of order is that in the second model, social order and visual order are treated as different things. The ethnographers cited above showed that social order exists within visually disordered settlements. People help their neighbors, they watch out for one another, they aren't criminals, they have jobs and lead normal lives (if poverty can be considered "normal," that is). And conversely, social disorder can exist in well-planned, visually ordered settlements; think about crime or anomie in nice planned neighborhoods

The only thing these two models share is the notion that central planning leads to visual order. But don't think that straight streets and checkerboard layouts represent the only kind of urban visual order (Smith 2007). The wide urban world contains many types of visual order, and many kinds of social order. But one does not produce the other. It's time to abandon those stereotypes.

Erickson, B. and T. Lloyd-Jones
1997    Experiments with Settlement Aggregation Models. Environment and Planning B: Planning and Design 24:903-928.

Why build a city on a mountain?

Here is a photo of Cerro Tenismo, the volcanic mountain that was covered by the Aztec-period city of Calixtlahuaca. I've directed an archaeological project at this site for several years, and I am still puzzling about why the founders of this city decided to build on a mountain. Some of this post is taken from an older post (of the same name) on the Calixtlahuaca Project blog.

Calixtlahuaca  covered most of the top and sides of this mountain, plus another hilly area to the southeast (to the left, in this photo). The several thousand inhabitants built their houses on stone terraces, which were also farmed with maize and maguey plants. The city was founded ca. AD 1100, and was occupied until the first couple of decades after the Spanish conquest of Mexico in 1521.

The first place to look for comparative insights into Calixtlahuaca's hilltop location is to other Mesoamerican cities built on mountains. Monte Alban and Xochicalco are two of the largest and best known examples, both powerful capitals during their day. It has long been clear to archaeologists that these cities were built where they were for reasons of defense. Images of mountaintop cities in Mesoamerican pictorial codices (see my entry on the Calixtlahuaca blog on these) tend to show battles and defensive walls. But for several reasons, we don't think that defense was a major factor in the layout of Calixtlahuaca:
The second factor is quite striking. The royal palace was at the base of the hill, completely unprotected, as was a large unexcavated platform (Sructure 16). The two largest temples, structure 3 (circular temple, dedicated to the wind god Ehecatl) and structure 4 (rectangular temple, dedicated to the rain god Tlaloc) were built part-way up the hill, but closer to the base. Again, these were relatively unprotected. When defense is an issue, the main civic buildings are almost always built at the top of the mountain or hill (again, think Monte Alban or Xochicalco, or any one of innumerable hilltop cities in the Old World).

Well, what is so surprising about building a city on a mountain if defense was NOT a major consideration? The answer is the effort required to build the site. Every house that was built had to be accompanied by the construction (and constant maintenance) of stone terraces. Temples 3 and 4 required massive platforms and large excavations into the hillside to build level areas for these temples and their groups.

There is much flat land in the surrounding Toluca Valley, so it would not have been hard to find a level location for the city. This was rich farmland, and we don't think populations were so high that people couldn't build their settlements on the plain. One factor that comes to mind about Calixtlahuaca's mountain location is show: the city would have looked very impressive to visitors approaching from the north, with its north flank covered with houses and large temples. But how can such a hypothesis be tested?

In order to gain additional perspective on Calixtlahuaca's location, I have been looking for other ancient cities around the world whose residential zones were built on mountainsides, with the civic architecture at the base of the hill. Ephesus (the Roman occupation) is one example (see photo), and I am looking for others. If you have suggestions—whether examples of similar premodern cities, or ideas about how to interpret Calixtlahuaca's location—let me know!
Posted by Michael E. Smith at 7:30 PM 5 comments:

Protesters in Sana'a, the capital of Yemen, have set up a tent city where they organize their protests against their repressive president. An article in Spiegel Online International starts,


" What started as a sit-in has turned into an experment in democratic society. In the last four months, between 3,000 and 4,000 tents have been pitched in the streets of the university district in the Yemeni capital Sana'a. The tent city includes pharmacies and a makeshift hospital, four daily newspapers, auditoriums, a garden and hastily constructed cement memorials for the martyrs.

It is a city of citizens, a taste of what Yemen could become, a concrete utopia made of tarps, pallets, satellite dishes and a hodgepodge of power cables the protesters have audaciously connected to the grid in the ancient city. There is a "diplomats' tent" and a tent for actors; there are daily poetry readings and demonstrations; there is even a prison."

This great photo is from: http://twitpic.com/43px3h. (check out the credit line: "©2011, The New Yemen, Free to be used during the revolution." The photo is by Abdulrahman H. Jaber.

This kind of temporary settlement joins the other examples of "temporary cities" that I blogged about a while ago. These settlements usually attract attention for their main functions (protest and contentious politics in Sana'a, art festival at Burning Man, etc.). But I think we should pay more attention to their urban features, which may have much to teach us about cities and how people form and live in cities.

I have been interested in traditional Sana'a for some time now. It is a distinctive variation on Arabian/Islamic urbanism, particularly well studied by scholars. Its neighborhoods are fascinating, and the presence of food-producing areas within the midst of high-rise apartment buildings is a surprising feature that may have lessons for urban sustainability and livability elsewhere. You have to cover several languages to resesarch traditional Sana'a, though. For some great photos, go to photographer Abdulrahman H. Jaber's website. and click on "Old City of Sana'a." You'll see some outstanding photos.

Email ThisBlogThis!Share to TwitterShare to FacebookShare to Pinterest
Labels: Protest, Temporary cities
Newer Posts Older Posts Home
Subscribe to: Posts (Atom)
"Wide Urban World" is a blog about cities as viewed from a broad historical and comparative perspective. As Winston Churchill said, "The farther back we look, the farther ahead we can see."