The big pyramids and the small houses 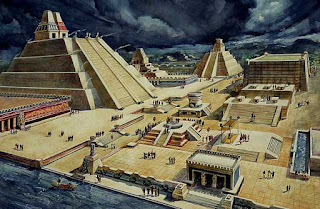 Most cities -- ancient and modern -- show a big contrast between large civic architecture and the houses of the common people. I've been thinking about this contrast a lot recently. Last week I helped guide a tour of visitors from the Heard Museum to the Aztec Templo Mayor in Mexico City, and then to Teotihuacan. Most of what we saw was the big civic architecture. The Templo Mayor was one of the largest pyramids in ancient Mesoamerica, sitting in the heart of the biggest city of the pre-Columbian past (known as Tenochtitlan in Aztec times). This was a BIG pyramid, and the archaeological ruins are quite impressive, both for the size of the structure and for the richness of the offerings that have been excavated in and around the temple. The visitors were suitably impressed.

On that same short trip to Mexico, I started correcting the proofs of my new book, At Home with the Aztecs: An Archaeologist Uncovers their Domestic Life (due out in February). The topic is the households and communities of Aztec commoners in the provinces, near Cuernavaca. These people didn't build huge pyramids, and they didn't engage in the sensationalist human sacrifices that the Aztecs are known for. They were everyday folks, farmers and traders who strived to make a good life for themselves. Yet their lives were connected to the big pyramids, whether they liked it or not. A painted bowl from Yautepec (site of my second major excavation project) somehow ended up in an offering at the Templo Mayor. Some of the taxes paid by the folks whose houses I excavated went to build the pyramids and support the luxurious lifestyles of the Aztec nobility. 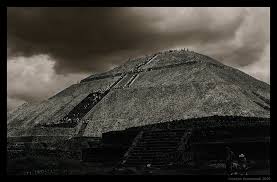 When we got to Teotihuacan, my colleague Saburo Sugiyama led the tour. Saburo has been excavating at Teotihuacan his whole career, and he knows the site like no one else. Most of what we saw on the tour were temples and pyramids, and some houses of the Teotihuacan rich and famous. There wasn't time to go see where the regular folks lived. You have to go outside the official archaeological zone to see the apartment compounds. Yet those residences tell an amazing story. Somehow, the people of Teotihuacan managed to forge a prosperous way of life for themselves. The average Teotihuacano had a far more luxurious life than the average Aztec, a millennium later. In fact, the Teotihuacan commoners had a better quality of life than just about any of the commoners of ancient Mesoamerica. How did they achieve that?  Sounds like the topic for a research project.........Some of the answers are in the artifacts excavated over the years at Teotihuacan, and stored in our laboratory at the site. 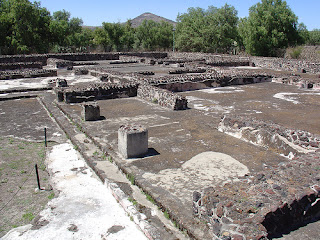 How did these ancient urban societies manage to link the commoners who lived in their small houses to the kings and nobles who lived in big palaces and built huge temples? To me, this is one of the key questions in the study of ancient cities, states, and empires. To get an answer we have to know about both kinds of contexts, and we need to have concepts and theories that link them together. Just looking at one kind of setting is not enough. We need a broad perspective, and that is something archaeologists are struggling to come up with. Stay tuned!

Posted by Michael E. Smith at 9:40 PM No comments:

Email ThisBlogThis!Share to TwitterShare to FacebookShare to Pinterest
Labels: Ancient cities, Inequality, Monuments, Tenochtitlan, Teotihuacan
Newer Posts Older Posts Home
Subscribe to: Posts (Atom)
"Wide Urban World" is a blog about cities as viewed from a broad historical and comparative perspective. As Winston Churchill said, "The farther back we look, the farther ahead we can see."