Why did some past cities flourish for many centuries, even millennia, while others grew and declined over a period of years or a decade?
Archaeologists have an incredibly extensive set of data on ancient urban sustainability, but we have yet to pursue targeted analyses of those data. I think that someday we will be able to answer the question posed above, but we are not yet close to an answer. I am following a theme I first addressed in my 2010 paper, "Sprawl, Squatters, and Sustainable Cities: Can Archaeological Data Shed Light on Modern Urban Issues?" Cambridge Archaeological Journal 20:229-253. I make the same point for all three topics -- that archaeologists have relevant data, but have not analyzed it yet in ways that can contribute to contemporary debates on urban issues.

I assigned my 2010 article in my ancient urbanism class (advanced undergrad) a year ago. One perceptive student (Seven Tomek) asked why I wasted time describing what archaeologists had not done yet - why didn't I just go out and do the analyses? Well, if I didn't already have several other research projects that take up most of my research time, I would do that. But it will take considerable dedicated effort to turn existing archaeological data into systematic and useful findings that are relevant to contemporary urbanization.

Here I will review one of the examples originally included in my 2010 paper: the longevity of settlements in the Yautepec Valley of central Mexico. This is based on a full-coverage regional survey that I carried out with two graduate students, Timothy Hare and Lisa Montiel (for details see our technical report or their dissertations). Actually, they did most of the work! For my 2010 paper I identified all "urban" sites located in the survey. This was a quick-and-easy definition: any site larger than the smallest Aztec city-state capital was counted as urban. The rationales is that we know the Aztec sites were functionally urban, so this was a convenient cut-off for earlier sites as well.

My measure for sustainability was longevity; that is, how long were cities occupied? This fits theoretical discussions in the sustainability literature that stress longevity as a marker of sustainability (e.g., Bernard C. Patten and Robert Costanza  (1997)  Logical Interrelations between Four Sustainability Parameters: Stability, Continuation, Longevity, and Health. Ecosystem Health 3(3):136-142). I arranged sites in chronological order, from the earliest urban sites (Late formative Period) up to the Aztec period. Here is the graph:


I should start out by saying that I have yet to carry out a systematic analysis of these data. My remarks here are impressionistic and suggestive, not definitive.There were several waves of urbanization. The first, in the Late Formative period (green bars), generated three cities that flourished for over a millennium. Their success is almost certainly due to their locations: adjacent to the the largest expanse of rich farmland in the entire Yautepec Valley. The biggest single wave of urbanization occurred in the Classic period (red bars), when the valley was conquered by an empire based at Teotihuacan. These towns probably organized the cultivation of cotton and its shipment to Teotihuacan. When Teotihuacan influence waned after a couple of centuries, these sites were abandoned (except for one).

Shortly thereafter, a period of lowered rainfall set in (yellow on the map), and few new cities were founded. The increased rainfall in the 12th century AD coincided with the arrival of the Aztec peoples in this area. A new wave of urbanization took place, first in the Early Aztec period, and then in the Late Aztec period. These new cities were small capitals of city-states. Most were then destroyed in the Spanish conquest of 1521.

While this description is too provisional and subjective to produce definitive results, a few implications can be drawn. First, a range of factors must be considered in explaining the longevity or success of ancient cities. These include soil quality, rainfall, imperial conquests, and local demographic processes. Second, different causal factors came into play at different periods. Classic period urbanization was part of imperialism, whereas earlier cities were formed and flourished for largely environmental reasons. Third, these results suggest that if archaeologists were to assemble parallel data form other survey projects, we would learn quite a bit about why some cities flourished for many centuries while others did not.

I deal with ancient urban sustainability in an earlier post: 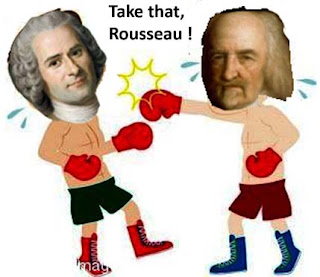 Are humans naturally violent or peaceful? Was life violent or peaceful before the Urban Revolution and states? What about prior to the origins of human society? For centuries these questions have been discussed in reference to the ideas of Jean-Jacques Rousseau and Thomas Hobbes. A recent issue of the journal Science has a very interesting theme section on "Human Conflict" (Science, volume 336, no. 6083, 18 May, 2012). There are some excellent journalistic reviews of research (see the Lawler papers cited below), and some interesting technical papers by experts on these topics such as Christopher Boehm and Samuel Bowles.

Andrew Lawler's piece, "The Battle over Violence" reviews some of the ideas in anthropology and archaeology. The subtitle of his paper is "Under the long shadow of Rousseau and Hobbes, scientists debate whether civilization spurred or inhibited warfare--and whether we have the data to know." This is a great article; Lawler says what I have thought for years -- that we don't have enough solid evidence to choose between opposing viewpoints, and that the conclusions of many scholars owe more to their philosophical positions than to the empirical evidence.

Rousseau argued that life before the state was more peaceful and egalitarian, and that states brough inequality, oppression, and fear. Hobbes, on the other hand, argued that life in the 'state of nature" (that is, life before states) was "solitary, poor, nasty, brutish, and short." States brought order, peace, prosperity, and progress. Liberals tend to look to Rousseau for philosophical inspiration, while conservatives look to Hobbes.

We know there was quite a bit of violence in ancient societies, to judge from skeletons with trauma and other evidence. But just how much violence? Different archaeologists can look at the same data and come to different conclusions. What does this mean? It means that we don't have good enough data, or good enough methods for interpreting those data, to make a solid, scientific conclusions.

A related question is ethnographic, not archaeological. Is there more or less violence in egalitarian (non-state) human societies compared to states? Again, there are lots of low- and medium-quality data, a dearth of good methods, and a diversity of opinions on the matter. A recent paper by a criminologist (Amy Nivette) has assembled most of the information and taken a good hard look. She points out the problems of making inferences from the data; not surprisingly, the !Kung or Shoshone hunter/gatherers don't keep modern crime statistics. Nivette shows that the nature of violence and conflict is much more complicated and culturally-influenced than one would like.

These same points apply to city walls in the past. In some urban traditions all cities were walled for defensive reasons. But in other cases, some cities were walled and others not. The Hobbesian (or materialist) interpretation is that the presence of city walls means that war and attack were the reasons the walls were built. But some scholars (the Rousseau-ians, or idealists) have asserted that walls were often built for symbolic reasons - to have a container for the town that symbolizes its cohesion, or else as a symbol of the power of the ruler or the authorities. So how can we choose between these alternative explanation? I don't know. We need better methods, better models, better ways of testing alternative ideas like this.

The special section in the journal Science is well worth looking at. Lots of good ideas, even if there is not as much hard evidence as we might like. But that is part of science. It is better to acknowledge the difficulty of interpreting scanty or faulty data than to rush ahead and make arguments as strongly as one can for one position or another. (I have discussed this problem of theoretical preconceptions getting in the way of interpreting data in my other blog Publishing Archaeology )

Looking over what I wrote above, I'm not sure I like how I equated Hobbes with materialism and Rousseau with idealism. I am a thorough and hard-core materialist, yet I think that Rousseau was closer to the mark on the advent of inequality and oppression after the Urban Revolution. People had it much better before states (see my "Myths of the urban revolution"). But then I'm not much good with philosophy. Give me data and theory and I'll try to figure out what happened in the past. But don't ask me about the grand meaning of it all.

Final note: Thomas Pynchon's Gravity's Rainbow, my favorite novel when I was in college, has a law firm with the name "Saliteri, Poore, Nast, deBrutish, and Short."  Maybe they represent the estate of Thomas Hobbes. Pynchon also has a great argument between two people on whether Beethoven or Rossini was the greater composer. Rossini wins!!!!

Posted by Michael E. Smith at 5:32 PM No comments:

Email ThisBlogThis!Share to TwitterShare to FacebookShare to Pinterest
Labels: Urban Revolution, Violence, War
Newer Posts Older Posts Home
Subscribe to: Posts (Atom)
"Wide Urban World" is a blog about cities as viewed from a broad historical and comparative perspective. As Winston Churchill said, "The farther back we look, the farther ahead we can see."