Collapse or Longevity? Failure or Success? 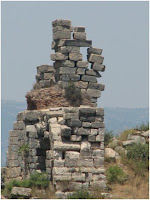 When many people think of the ancient Maya, the term "collapse" often comes to mind. The Mayas were a group that were around for a while, but then collapsed. Archaeologists have spent a lot of time (and a lot of fieldwork and publications) trying to figure out how or why (or sometimes, whether) the Maya collapsed. If they collapsed, there must have been something wrong with Maya society, right? But the Maya cities lasted for some seven centuries before they were abandoned. Think about it. Seven hundred years. Were the Maya a failure (they collapsed), or were they a spectacular success (they lasted 700 years).

The idea that something must have been wrong with ancient cities or civilizations to make them collapse is a popular notion. And while it is a valid question to ask how or why a society like the Classic Maya collapsed, any such question should be paired with a consideration of just how long they managed to thrive. This collapse bias surfaced again today in a paper just posted in the Proceedings of the National Academy of Sciences:  "Human domination of the biosphere: Rapid discharge of the earth-space battery foretells the future of himanking" by Rohn R. Schramski, David K. Gattie and James H. Brown. This is a fine paper, about the global chemical energy supply on earth, and how it is being depleted at an incredibly fast rate right now. But they had to throw in a dig at ancient societies:

Let's take a different look at those four ancient societies in comparison to contemporary nation-states:

So, which of these societies seem successful, and which ones seem too young to judge? I am dating the start of the European nation-states to 1648, the signing of the Treaty of Westphalia which created the modern system of nation-states. If European nations manage to survive another half century or so, they will have matched the longevity of ancient Greece (I am using the Classical and Hellenistic periods here). And if they last another 350 years they will match those failed collapsers, the ancient Maya.

I am the last one to deny the significance of the Classic Maya collapse. I think the revisionists who claim that they didn't really collapse are just plain wrong (see some of my posts on Publishing Archaeology about this, such as this one about Jared Diamond and his critics). But if the Maya managed to thrive in the jungle for seven centuries, maybe that fact should outweigh their eventual collapse. They spent centuries doing many things right, and then they got trapped for a few crucial decades and collapsed.

I will just chalk up the collapse quote above to the fact that scholars outside of history and archaeology tend to be clueless about ancient societies. I think the authors of the new paper are correct when they claim that ancient collapses "are of questionable relevance to the current situation." Much as I'd like to believe that the sustainability (or lack thereof) of ancient societies might have lessons for us today, in fact the technological, energetic, and demographic situation today is radically different from that of ancient societies like the Maya. I do think that ancient cities and societies have lessons for us today, and that is a major theme of this blog. But the nature of overall societal sustainability may not be one of those lessons. Can we decipher the "meaning" of ancient buildings? 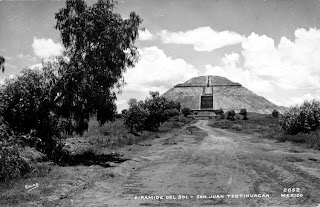 Many people wonder about the "meaning" of ancient buildings and sites. Why was the Pyramid of the Sun at Teotihuacan built? Was it dedicated to a specific god? What meaning did it have to the people who built it, and those to witnessed ceremonies there for centuries afterword? I am a skeptic about talk of ancient "meanings" of this sort (see a previous post about high-level meanings.) I agree with my colleagues Kent Flannery and Joyce Marcus (1993) that this kind of religious symbolism and meaning cannot usually be deciphered without written texts that explain ancient myths and beliefs. There are no such texts from Teotihuacan, so it is unlikely that we can figure out just what this pyramid meant in ancient times. But we do have some clues. This position is explained in general terms by architectural theoretician Amos Rapoport, one of the top scholars on wide urban topics and one of my heroes.

Middle-level meanings communicate messages of power, control, stability, wealth, and other positive values that rulers and elites want their subjects to receive. These meanings are more general and widespread than high-level meanings. Big buildings signal power, whether in ancient Mesopotamia or Classical Rome. Because these messages are valid across cultures (and not culturally specific), archaeologists can often interpret them from the mute remains of ancient architecture.

Finally, low-level meanings concern the specific ways that people interact with buildings. They provide cues for how to behave appropriately, where to enter or exit, and other messages concerning movement, privacy, accessibility, and the like.


I will illustrate Rapoport's scheme with the Aztec major temple, the "Templo Mayor" in their imperial capital Tenochtitlan (today the ruins are in the middle of Mexico City). It turns out that we have a good idea of the high-level meaning of this temple, mainly because of a key find of a stone monument, coupled with written evidence of Aztec creation myths. The monument, a stone slab some 10 feet in diameter, depicts the Aztec goddess Coyolxauhqui, who has been dismembered. It was excavated in front of the main front steps of the Templo Mayor. This monument illustrates the birth of the Aztec god Huitzilopochtli, whose first action after birth was to kill his sister Coyolxauqui (yes, that sounds odd; if you want the whole story, check one of the many books on the Aztecs, such as my book, The Aztecs). We know this myth from written sources, and from some early Spanish pictures (see the illustration from Sahagun's Florentine Codex). In terms of religious symbolism (high-level meaning), the Aztec main temple was a model of Serpent Hill, where their god Huitzilopochtli was born and killed his sister Coholxauhqui. The human sacrifices that took place on top of the Templo Mayor were re-enactments of Huitzilopochtli's birth.

The middle-level meanings of the Aztec Templo Mayor were messages of power and wealth. No other Aztec city had a pyramid this big, with such sumptuous offerings. The Aztec emperors were powerful, and the city and empire were wealthy. Visitors to the city from foreign lands may not have known the myth of Huitzilopochtli's birth, but they could clearly understand the middle-level messages being sent deliberately by the Aztec emperors through their main temple. The low-level meaning of the Aztec Templo Mayor concerned access to the temple: who could approach it, who could climb the steps, and what were people expected to do when they approached the building.

Let's return to Teotihuacan to see if we can glean any information about high-level meanings from the main temples. We lack the myths of the Aztecs, in written and painted form. But one of the main temples, the "Feathered Serpent Temple", was covered elaborate carved images. One of the key images is the feathered serpent, a major deity at Teotihuacan. So in this case we can suggest that this temple was dedicated to a particular god. But we can't say much more than that about it's high-level meanings. 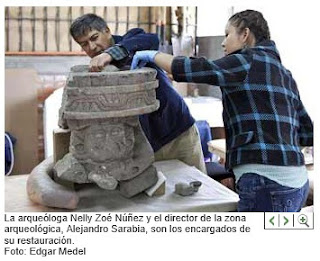 A recent discovery at the Pyramid of the Sun at Teotihuacan furnishes a clue about possible high-level meanings at this largest temple. Archaeologists have known for some time that another major god at Teotihuacan was the "Old fire god," whose stone sculptures are often excavated in houses. A very large example was excavated a couple of years ago in the Pyramid of the Sun; the photo here shows archaeologists Alejandro Sarabia and Nelly Zoe Nuñez working on this find in the lab. While we are a long way from being able to show that rituals at this temple reenacted key myths (as at the Aztec case), this find does provide a clue about the possible symbolism (high-level meaning) of the Pyramid of the Sun. So while we are not "clueless" about the ancient symbolism of this structure, we really know very little about its high-level meaning. But its middle-level meanings are much clearer, as anyone who has approached the building from the west can attest. We can understand the power and wealth and stability communicated by this building, even if we know almost nothing of the culture, language, or myths of Teotihuacan. 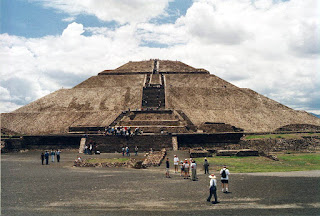 If you want to learn more about the three levels of communication, the place to start is with Rapoport's publications. I discuss them in several papers, and Flannery and Marcus discuss very similar ideas. There are several levels of meaning in the wide urban world, and some are more accessible to us today than others.

Posted by Michael E. Smith at 9:48 PM No comments:

Email ThisBlogThis!Share to TwitterShare to FacebookShare to Pinterest
Labels: Ancient cities, Architecture, Aztecs, Communication, Meaning, Teotihuacan
Newer Posts Older Posts Home
Subscribe to: Posts (Atom)
"Wide Urban World" is a blog about cities as viewed from a broad historical and comparative perspective. As Winston Churchill said, "The farther back we look, the farther ahead we can see."