Cities through the ages: One thing or many?

I am in rainy Vancouver, BC. Tomorrow I will give a lecture at Green College, University of British Columbia, with this title ("Cities through the ages: One thing or many?"), and then Thursday I head downtown for the annual meeting of the Society for American Archaeology. I first gave a talk with this title at the Santa Fe Institute in 2013. At that time I developed an argument that there are, and have been, only two basic types of cities. I called them economic cities and political cities. Most contemporary cities are economic cities (dominated by capitalist economic processes), and that most ancient cities were political cities (dominated by political dynamics). The implication (it seemed to me, though incorrectly) was that the models of urban scaling that had been worked out for modern cities should not apply to ancient cities.

The urban scaling group (Luis Bettencourt, Jose Lobo, and Scott Ortman) had invited me to SFI to explore the possibility of applying the scaling models to ancient cities. I arrived ready to tell them to forget it. Ancient and modern cities were just too different in their economies, and I mistakenly believed that the scaling regularities of modern cities derived from capitalist agglomeration processes. But within a few hours of talking with these guys, they convinced me that the basic model that explains the modern scaling results is general enough to apply to ancient cities too. I had to scramble to modify my public lecture (the next day) to incorporate this insight (Bettencourt 2013).

So, here I am, nearly four years later, giving a talk with the same title. But now I have TWO answers to the question, "One thing or many?" From the perspective of how cities operate and how they grow, I still see two very different types of cities: economic and political. Many of the economic models of contemporary cities simply do not apply to ancient cities. But from the perspective of  how people use the built environment of settlements, and how people interact with others, and the generative implications of those interactions, there is only one type of city. In fact, I should say there is only one type of settlement, because the patterns apply to non-urban settlements as well.

The City as Two Things: Economic and Political Cities


Most contemporary cities, and some past cities, are "economic cities." Their growth and operations are dominated by the commercial economy. Relevant concepts are agglomeration processes and agglomeration effects. Wage labor employees are matched with jobs in cities; urban public goods are shared by individuals and firms; and an educated workforce leads to prductivity gains (Duranton and Puga 2004). Sounds pretty standard for modern urban economics, but many of these things just plain don't apply to ancient cities. Many of these lacked wage labor and formal education. Agglomeration effects were much smaller or very different.

In some modern cities, politics dominates economics. These tend to be the large mega-capitals of developing nations. They are known as primate cities - not primates as in Planet of the Apes - but primate in the sense that the largest city in the system is far too large. It is too large because it is a political capital in a nation-state where politics dominates economics. See DeLong and Schleiffer (1993), or Ades and Glaeser (1995) on primate cities.

But this was the standard kind of city in the ancient world. Even in a heavily (noncapitalist) commercialized economy such as Classical Rome, politics played a heavy role in urban growth and operation, and thus many of the basic urban dynamics were quite different. Much economic activity in Rome was "unproductive" in that it was oriented at luxury, not growth of productivity (Baumol 1990).

The City as One Thing: Energized Crowding and Social Interactions


But when we look at how social interactions in the built environment lead to highly regular patterns relating settlement population to other features, there is only one basic type of settlement. This is not a claim based on theory; it is an empirical conclusion. Luis Bettencourt's (2013) model of scaling derives the quantitative relationships between population and other urban features from the basic features of social interactions within the built environment. And this model explains both the regularities of scaling in contemporary urban systems and the same regularities in ancient urban systems. See some of my prior posts on scaling for more details :


But if you have doubts that the archaeological results are the same as the modern results, look at this table (from Smith 2017). 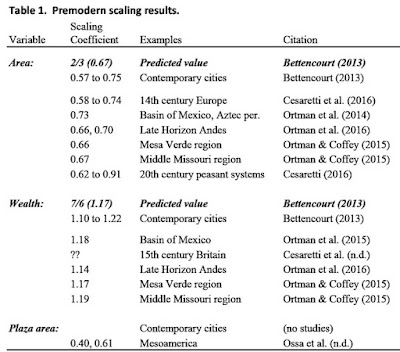 To me, these studies reach the most amazing results of any research I have ever been involved with. Why should there be such regularities in the sizes of settlements within settlement systems? How can the ancient systems have the same quantitative patterns as the modern systems? The cities are different. The societies and economies are different. People work and play differently. They move about differently. But somehow, the aggregate activities of people interacting in settlements produce the same kinds of quantitative patterns anyplace we look. Well, almost anyplace - it turns out that mobile hunter-gatherers have different patterns. But that is a different story..........

My talk tomorrow will be in Green College, UBC, a residential college for graduate students, postdocs, and faculty. This is a fascinating intellectual community in a gorgeous natural and built environment. It is part of a diverse series called, "The next urban planet: Rethinking the city in tome." What a great title for a series of lectures! I am staying in the Green College Guesthouse, where I have a cozy gas fire to keep out the damp and cold. I look forward to spending time with archaeologists, urban scholars, and others at UBC tomorrow. 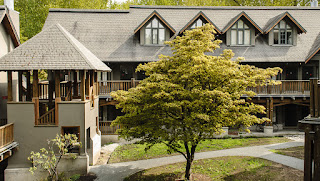 Email ThisBlogThis!Share to TwitterShare to FacebookShare to Pinterest
Newer Posts Older Posts Home
Subscribe to: Posts (Atom)
"Wide Urban World" is a blog about cities as viewed from a broad historical and comparative perspective. As Winston Churchill said, "The farther back we look, the farther ahead we can see."