Why do all cities have neighborhoods? 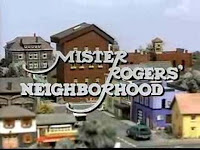 I find that I always hesitate a bit when writing that "all" cities have neighborhoods. That is a tough claim to prove. We simply don't have information about all the cities that have ever existed, so a claim for the universality of something like neighborhoods must rest on indirect evidence. Here are the three lines of evidence that make sense to me. 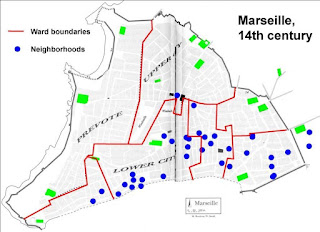 First, every description of a city that is sufficiently detailed and focused to mention the existence of neighborhoods, does in fact mention neighborhoods. This is far from an air-tight argument. But I've been looking at city descriptions like this for a number of years now, and so far this claim has held up. These include ethnographic reports of cities around the world, historical accounts of cities before the modern era, and archaeological reports of ancient cities. Archaeologists started thinking seriously about neighborhoods about eight years ago, and guess what? Since then, many reports of neighborhood organization have popped up. Check some of the works in the bibliography below. 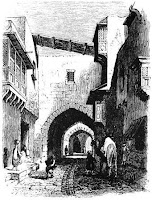 Second, many bin-depth studies of neighborhoods, in the past and the present, have found that neighborhoods are crucial social and spatial units within their city. They are important in many ways for urban residents, and they are important for the overall operation and functioning of the city. Some of my favorite such studies are Robert Sampson's analysis of Chicago neighborhoods today, Abraham Marcus's study of Aleppo in the 18th century, and Eva Lemonnier's identification of neighborhoods at the ancient Maya city of La Joyanca. See: Why are neighborhoods important? (2014).   Or, in Publishing Archaeology, see Archaeological concepts of community confront urban realities today (2015).

Third, I carried out a study, together with a bunch of undergraduates, of neighborhood organization at semi-urban settlements (Smith et al, 2015). The study was based on the assumption that if neighborhoods formed at these rapidly-formed, often chaotic, and sometimes specialized settlements, then they would form at any good-size human settlement. We found neighborhoods did indeed exist at Plains Indian aggregation sites, arts festivale, RV camps, protest camps, shantytowns, military camps and forts, internment camps, company towns (including ancient Egyptian workers villages), and refugee camps. The only kind of settlements where we could not confirm or discomfirm the presence of neighborhoods was disaster camps.  See : Neighborhoods in semi-urban settlements (2011). 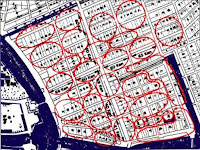 So, if neighborhoods really are urban universals, why is that the case? In our 2015 article, we give two types of answers: ultimate causes, and proximate causes. These concepts, borrowed from evolutionary biology, refer to the deep underlying causes of social phenomena (the "ultimate" causes) and to the basic day-to-day reasons for their formation ("proximate" causes). The underlying, ultimate cause of neighborhood formation is that people in cities need, or want, to live their lives on a smaller scale than the entire city. Some studies suggest that this is caused by constraints on human memory; one can only recall so many people, and effective social networks cannot be too large. Other studies suggest that living in cities causes social stress, and neighborhood organization is a way of relieving that stress.

It is interesting to note that neighborhoods can form in two very different ways. The most common path throughout history was the bottom-up approach. People living in an area interact with those around them (their neighbors), and eventually clusters or people, or communities, develop on their own out of the day-to-day actions of people. But in some cases, city or government authorities create neighborhoods. They organize cities from the top down, and people move into ready-made neighborhoods. 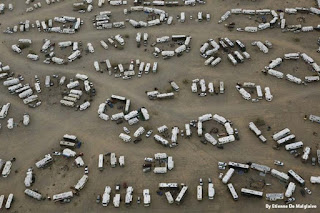 Marcus, Abraham
1989    The Middle East on the Eve of Modernity: Aleppo in the Eighteenth Century. Columbia University Press, New York.

Email ThisBlogThis!Share to TwitterShare to FacebookShare to Pinterest
Labels: Communities, Neighborhoods, Urban universals
Newer Posts Older Posts Home
Subscribe to: Posts (Atom)
"Wide Urban World" is a blog about cities as viewed from a broad historical and comparative perspective. As Winston Churchill said, "The farther back we look, the farther ahead we can see."