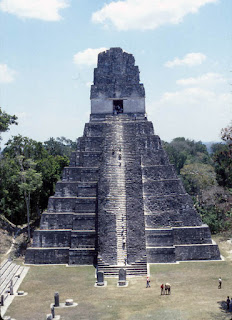 Two factors conspire right now to emphasize to me the importance of ancient Maya urban demography. First, I finished reading David Webster’s new book, The Population of Tikal (Webster 2018). Second, today I returned from a Working Group of the Social Reactors Project at the Santa Fe Institute , where our focus was on Maya cities and settlements. Needless to say, we talked a lot about population.

One of the most important things one can know about a city or settlement is its size. How many people lived there? Over what area? (and, consequently, What was the density and how did it vary?) These are fundamental observations in many disciplines that study cities and settlements, from urban history to urban economics, to urban geography. In chapter 3 of my current book, Urban Life in the Distant Past, I make the case for the importance of knowing the sizes of cities in the past (Smith n.d.).

Webster’s book reviews past population estimates for Tikal (and other Maya sites and regions). These are judged to have been too high, largely on the basis of comparative studies of regional population densities of early states in other parts of the world. “By overestimating Classic Maya populations, we have created problems that do not exist” (p. 3):
1.       Why were Maya populations so large and dense compared to other early states
2.       How could the landscape support so many people,
3.       How can we explain the huge population drop with the Classic Maya collapse? 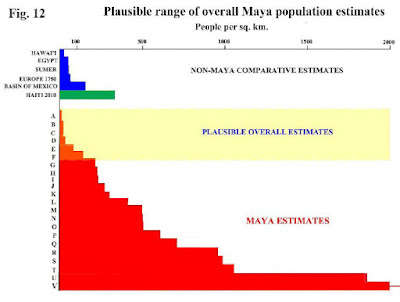 But wait, how can you compare an urban density at Tikal to a regional density for other regions? Isn’t that a comparison of apples and oranges? Those familiar with David Webster’s past work will get this right away: The Maya did not have cities, and therefore the concept of urban population density is moot!  “I prefer not to call any part of this landscape a ‘city’.” (p. 35). OK, maybe instead of “urban” we should call inner Tikal, “The area close to the pyramids that had a higher density than the outlying areas.” But this would still cast doubt on many of Webster’s comparisons. 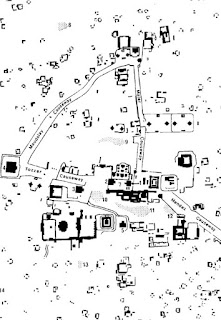 Another problem I have with the new book is that much of the quantitative data are presented within the text, and not in tables. Yes, there are a few data tables with some pertinent information. But I get confused, for example, when he gives a population estimate for Tikal of 10,000 (p. 52, paragraph 2), an area estimate of 452 square km (p.52, paragraph 7), and an overall density of “100-175 people per sq. km” (same paragraph). Huh? 10,000 people divided by 452 sq km is a density of 22.1 persons per sq km. One of these figures must be off.

I must admit that this is a pet peeve: If you use quantitative data, put them in a table! I struggled throughout the book with this. Yes, there are a couple of tables with data. But where making detailed comparisons and analyses of population and density data throughout the book, the figures are only found in the text, not in tables. Putting quantitative data into the text but not in a table makes it difficult for readers to re-use or analyze the data.

I’ll stop here, this is not a book review. The book is fun to read, like most of David Webster’s work, and I learned a lot. But the basic quantitative treatment, and the lack of a good conceptual framework for urbanism, or for regional settlement variation, limits the value of the book.

Instead of giving a report of our workshop on Maya settlement, I’ll just mention a few key points.

First, we have found data on several regional settlement systems where area scales with population in a superlinear fashion. That is, larger sites are LESS DENSE than smaller sites; This is the opposite of all other agricultural societies we have studied (see our papers here). So, Maya settlement differs from other agricultural societies in ways that remain hard to pin down. We have a paper in the works, and plans for more collaborations and research in the future.

Second, some Maya settlements are very much like settlements in other areas, and some are very different. Not too surprising, I guess, but we discussed some of the patterns.

Third, Angkor looks very different from the Maya cities. It had a very dense urban core, with planned orthogonal neighborhoods surrounding major temples, surrounded by a large sprawling area of temples, houses, and reservoirs, In comparison, Maya urban cores seem only slightly higher in density than their outer neighborhoods. I’m starting to wonder about the usefulness of Roland Fletcher’s (2009; 2012) concept of “low-density urbanism” as a category that includes the Classic Maya and Angkor.

Fourth, we discussed the use of LiDAR for analyzing the sizes and layouts of Maya cities. 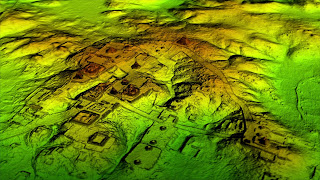 We spent some time comparing Tikal and Caracol. My view is that Caracol was a large, integrated urban center, while Tikal was a much smaller city of ca. 16 sq km. (I know the Chases will agree about Caracol, but I’m not sure of their views of Tikal). A key question – indeed, one of our targeted themes at the working group – is the nature of settlement boundaries. I don’t see any evidence for clear boundaries at Tikal. However, there does seem to be a drop-off in density beyond the central 16 sq km mapped by Carr and Hazard, which favors bounding the city there (see table).

Whereas Caracol has various features that seem to signal a spatial and social integration over a large area (causeways, replicated patterns of civic architecture pointing to the integration of different areas, and a continuous stretch of agricultural terracing). Outside of the core area, Tikal lacks these things. All those areas beyond several km from downtown Tikal – these must have been rural areas, the hinterland of the city of Tikal. This is a provisional analysis. I want to analyze the density patterns objectively (kernel density analysis), to see whether there is indeed a zone of declining density (well, more precisely, I want a student to do this…). We should do such analyses for all of the Maya (and other!) sites that are well mapped. Intra-urban density distributions are a big unknown for ancient cities, but we now have the data and methods to work on this question. 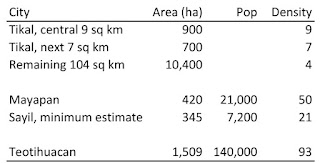 This  table shows a bit of density data. I was having trouble finding the information, buried in Webster’s text, so I got the Maya figures from a nice table in a paper by Barbara Stark (Stark 2014). Note the drop of 50% in density beyond the central 16 sq km. Teotihuacan figures are from a paper now under review (Smith, et al. n.d.).

I think it would help if archaeologists could agree on a series of zones over which to calculate population density. Density is, in fact, a very complex phenomenon for modern cities, with lots of relevant measures (Campoli, and MacLean 2007; Dovey, and Pafka 2014). But for archaeology, it is best to concentrate on straight population density (persons per hectare), calculated over one of several spatial units (depending on available data and on research questions). I suggest five relevant units, as follows:

1.   Regional density, 1: Large area. For a large zone including several urban centers. E.g., the southern Maya lowlands. Useful for large-scale comparisons (of the type Webster makes with other regions).
2.   Regional density, 2: Urban hinterland. Density over the hinterland of a city. E.g., Copan Valley. Useful to compare settlement in, say, the Copan Valley with the Belize River Valley.
3.   Urban density: whole city (all of Tikal or Caracol, or Teotihuacan). This is probably the most useful measure for urban comparisons. Of course, one must first identify the boundaries of the urban settlement….. We discussed this at SFI, and I am working on some methodological guidelines.
4.   Epicenter density: The population density of residences clustered around the ceremonial core. Not sure if this should include the civic areas or not. I am less confident in this unit, compared to the others.
5.   Neighborhood density: Density of a delimited neighborhood or zone. This is useful for several reasons: (1) To compare neighborhoods within a city; (2) To generate density data where whole-site information is not available. For example, consider Mohenjo-daro. Several neighborhoods have been completely excavated, but the residential patterns of the entire site are not clear. 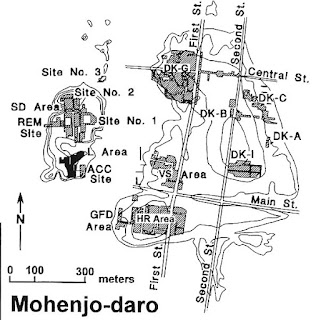 If you were looking for solid data or conclusions about Maya urban demography here, I am sorry to disappoint you. This field is in its infancy. Culbert and Rice (Culbert, and Rice 1990) was a crucial work, but there has been very little work since then. Webster’s new book is a step in the right direction, but we need many more such analyses (with lots of data in tables!). But I am more optimistic now than I’ve been for some time now. The session at SFI made some progress, and I see some good research coming out of these and other archaeologists in the near future. I am itching to work on settlement delineation at a variety of sites, using quantitative spatial methods. And, finally, I know that a number of prominent Mayanists agree that urban demography is important, and I look forward to more work in the near future.