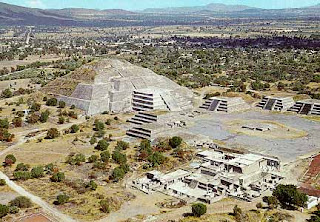 This tweet came through yesterday, advertising an article in Forbes:

Geologists have mapped a secret tunnel and chamber found beneath an Aztec Pyramid: http://on.forbes.com/6015EBVRt

Geophysical prospection work recently uncovered a tunnel/chamber deep underneath the Pyramid of the Moon at Teotihuacan. This is potentially exciting news; the most spectacular finds at Teotihuacan in the past decade are from another tunnel, excavated by Sergio Gomez under the Feathered Serpent Pyramid at the site. Indeed,t some of these objects are part of the current exhibit of Teotihuacan art, "Teotihuacan: City of Fire, City of Water" now at the Phoenix Art Museum.

A big problem with the Forbes article is that it calls Teotihuacan an Aztec site. Oops. As is well-known, Teotihuacan was abandoned and in ruins centuries before the Aztecs came on the scene. Several us us posted complaints on twitter, including Caroline Dodds-Pennock. Then I got an email from Alex Knapp, Associated Editor for Science at Forbes, asking just what was wrong with the article. I replied by sending him this list:

(1) Error in the title:  This is not an “Aztec” pyramid, as claimed. It was built and abandoned long before the Aztec period.

(3) Misleading date in the second sentence: Technically, the claim that Teo monuments “predate the Aztec empire by at least 300 years is correct. With the same logic, you could claim that the Romans preceded the United States by at least 300 years. This is technically correct, but misleading.  Teotihuacan flourished from AD 100 to 600.  Aztec society dates to AD 1100-1521, and the Aztec empire dates to AD 1428 – 1519.

(4) Error in second paragraph, the Moon pyramid does not “appear taller” than the Sun pyramid, as claimed. See photo.

(5) Misleading statement, last paragraph: “The origin of the tunnel system - and the city – remains mysterious.” The term mysterious is frequently taken by the public to mean that some feature is too advanced or complicated for mere mortals to have devised, and thus one must invoke aliens. It is a common term on “Ancient Aliens” and pseudo-scientific internet sites that claim ancient cities were built by aliens. Archaeologists have data on the origins of the city, and this particular tunnel has not been sufficiently studied to reconstruct its chronology. There is nothing mysterious about the city or the tunnel.

(6) Error, last paragraph: “Archaeologists attributed the foundation of Teotihuacan to various Mesoamerican cultures, like the Toltec, Zapotec, Mixtec, and even Maya.” I know of no archaeologist who has ever claimed any of these cultures as the founders or source of Teotihuacan. Prior to 1941, some archaeologists speculated that Teotihuacan was a Toltec site (that is, built by the historical Toltecs). But after 1941, it was recognized that The Toltec capital was Tula, not Teotihuacan, and that Tula rose to prominence 400 years after the fall of Teotihuacan. The other suggestions are ridiculous.

(7) Misleading statement, last sentence: “Then the Aztec took over the abandoned ruins.” The Aztecs were aware of the ruins, and they even built some towns on the site of the ancient city. But they did not “take over” the ruins, in the sense of establishing an official presence, or regulating the ruins, or claiming them as belonging to the Aztec state or empire.

(8) Error, last sentence: the Aztecs “rebuilt the old temples and expanded the preexisting tunnel-system.” The Aztecs did not rebuild the temples of Teotihuacan. As for the tunnels, we don’t know yet whether the Aztecs used or modified them.