The very phrase "Viking urban planning" may strike some as an oxymoron. The Vikings are famous for raiding, conquering, and pillaging, hardly activities that resonate with the the careful design and planning of cities. Yet a group of geometrical fortresses exhibiting exacting planning were built in Denmark by the Viking king Harald Bluetooth around A.D. 980, and these give us insights into cities and planning in the Viking age. Most of my discussion here is based on Roesdahl (1987), an excellent discussion of these fascinating sites.

At least four of these fortresses are known. They are often referred to as the "Trelleborg fortresses," after the first one to be discovered and excavated. Figure 2 shows plans of three of these settlements. These sites are clearly planned; they correspond to both of the measures of urban planning for ancient cities: standardization among cities, and coordination of buildings within cities (Smith 2007). The main features they share are: outer circular walls  with ditches; with four gates at the compass points; two axial roads that link the gates; a ring-road inside the rampart; and large standardized long-houses arranged in quadrangles (Roesdahl, p.211). Within each site, the houses are identical in size and form.

Based on artifact dating and dendrochronology, all of the Trelleborg fortress sites were built in or close to A.D. 980, and they were only used for a very short time. Although the housing at first glance looks like soldier's barracks, excavation shows that men, women, and children lived in the sites, and that some were craftsmen. Roesdahl interprets these as "very special and very organized royal manors" (p. 217). Several reconstructions of the houses have been made (Fig. 4).

King Harald Bluetooth ruled Denmark from around A.D. 958 - 985. His realm covered a sizable part of southern and western Scandinavia (figure 5). He was the first Viking king to convert to Christianity, and he set up elaborate rune stones at Jelling (fig. 6), in association with several large burial monuments. In case you were wondering, Harald Bluetooth provided the name for the Bluetooth wireless communication technology, developed by the Swedish company Ericsson. The Bluetooth logo consists of the runic characters for King Harald Bluetooth's name.

These circular fortresses are unique in Scandinavian urban history. They do not have clear predecessors or successors. In the interpretation of Else Roesdahl, they were built in a time of decline and crisis, "primarily to control a country ready to revolt." (p. 226). Within a few years, Harald's son, Sven Forkbeard, revolted, and Harald was killed in one of the resulting battles. 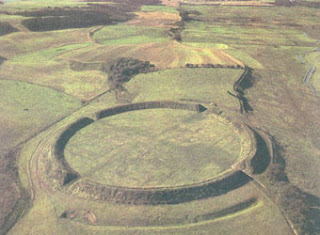 The Trelleborg fortresses are important as monuments of Harald Bluetooth's reign, and as a good example of the unusual practice of circular urban design (Smith 2007; Johnston 1983). But perhaps most importantly, their discovery and excavation overturned existing ideas of the urban accomplishments of the Vikings. In the words of Roesdahl,


[The discovery of] Trelleborg causes a sensation. Nobody had thought the barbaric Vikings able to plan, organise or construct such a sophisticated structure, and the learned world conseequently had to rethink their concept of Vikings. (p.208)

Johnston, Norman J.
1983    Cities in the Round. University of Washington Press, Seattle.

Roesdahl, Else
1987    The Danish Geometrical Viking Fortresses and their Context. Anglo-Norman Studies 9:208-226.

2007    Form and Meaning in the Earliest Cities: A New Approach to Ancient Urban Planning. Journal of Planning History 6(1):3-47.


*** ONE of my favorite historical novels is The Long Ships by Frans Bengtsson, which starts with the end of Harald Bluetooth's reign and follows its Viking protagonists for several decades. According to a book review by NPR.org:   "Even though The Long Ships was first published in 1941, it remains the literary equivalent of an action-and intrigue-filled adventure movie that won't insult your intelligence...Bengtsson is an infectiously enthusiastic and surprisingly funny writer--even readers with zero interest in the Europe of a millennium ago will want to keep turning the pages." How can one not like a book whose characters have  names like Sven Forkbeard and Ragnar Hairy-Breeks?
Posted by Michael E. Smith at 2:00 PM